Pregnancy and motherhood come with a lot of changes, both physical and mental. Pregnancy brain is a term often used to describe the changes in a new mother’s brain that may cause her to experience memory lapses, forgetfulness and overall brain fog. Scientific American reports that about 80 percent of new mothers experience a decline in cognitive activity during this time in their lives. However, there are positive changes that happen in the brain as well during pregnancy.

There is a vast hormonal change after giving birth that may contribute to pregnancy brain. As a woman’s body is trying to readjust back to a normal state, the hormones are going crazy, which can cause a woman to have a lower cognitive function. Sleep deprivation is also a big factor in forgetfulness. Even before the baby is born or after hormones have readjusted, most mothers do not get a lot of sleep. The sleep they do get is also not a quality deep sleep, but short spurts of light sleeping. A study published in PlosOne reports that even 18 months after a baby is born, moms are often sleep deprived. New moms are also overwhelmed with new information. There is a big learning curve of being a mother and taking care of a baby. Trying to process so much new information at one time can cause a person to not retain all of it, leading to pregnancy brain. 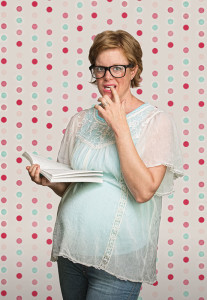 There are some innate, natural occurrences that come along with being a mother and taking care of an infant. Many pregnant women experience lower reactions to stress, both physiological and psychological. Their responses to stress are lessened, which may help the mother and baby to be protected from the possibility of harm. This benefit carries onto the postpartum period, as breastfeeding hormones help to maintain this response to stress. Studies have also shown that soon after giving birth, women show brain changes in several key areas. There is often an increase in volume in the hypothalamus, amygdala and striatum. These areas are essential for regulating emotions and motivating women as parents to be protective and make sound decisions for their child. Dr. Felice Petraglia reports that the increase in the volume of the hypothalamus is due to hormones rising during pregnancy to create and grow the placenta. As the body creates identical hormones, the rates of them rise. Pregnant women can also easily sense the emotions of other people such as anger, fear and disgust. The enhanced ability to sense emotional changes may help new mothers to take care of their infants and ensure their survival. Estrogen and oxytocin are related to the sensitivity of the surrounding environment, so as these hormones rise in pregnant women, they reap the benefits of having the heightened maternal response. The brain reorganizes itself during pregnancy to prepare for delivery and taking care of an infant. This reorganization is encouraged more by delivery, breastfeeding and interactions between the mother and child. While some of the results of this phenomenon do not seem beneficial, there are several changes that occur that are necessary for new mothers to be the best caretakers for their children.