An alternative ultrasound conducted during the first trimester of pregnancy, a nuchal translucency screening is one of the most accurate screening tests available today for early prenatal diagnosing. These scans can aid in determining your baby’s risk of congenital disorders such as Down syndrome and can reduce the risk of your child being born with a chromosome abnormality, as they are rather accurate at spotting concerns when paired with other first-trimester examinations.

Understanding Down Syndrome, Trisomy 13, and Trisomy 18

Babies with Down syndrome (trisomy 21), are the most common congenital chromosomal disorder, causing lifelong intellectual delays, impaired social development and physical issues, including those involving the heart, digestive system and other organ systems.

Edwards syndrome (trisomy 18) is less common than Down syndrome, affecting approximately 1 in 3315 births. It can cause serious physical problems such as heart defects, kidney problems and irregularities to the head or face. Typically, babies born with this disorder may not survive beyond their first week, with only about 10 percent reaching age one.

Patau syndrome (trisomy 13) is the most severe chromosomal abnormality, causing serious and usually life-threatening health problems such as profound mental disability, heart, brain or spinal cord defects, extra fingers or toes or a number of other abnormalities. Only about 10 percent of babies born with Patau syndrome survive past age one.

The Purpose of Nuchal Translucency Scan 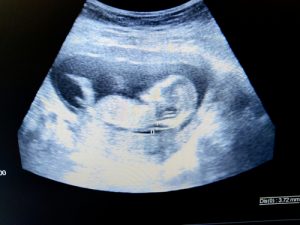 A nuchal translucency scan uses an ultrasound of the abdomen to measure the level of fluid-filled space behind your baby’s neck, also known as nuchal translucency. The measurement of these levels do not serve as a diagnostic but too much or too little fluid can help your doctor estimate the risk of your baby having a chromosomal abnormality.

This scan is typically performed between 11 and 14 weeks of pregnancy, however for women referred for a dating scan, which typically take place before week 12 of pregnancy, a nuchal translucency scan can take place at the same time. The reason for this time frame is due to the fact that the fluid behind the neck that is tested tends to be reabsorbed by the body after 14 weeks of gestation, thus making it harder to measure later in pregnancy.

Since this is a screening test, a positive outcome (showing a higher risk) does not necessarily indicate that your unborn child has a developmental problem, rather, it suggests that additional diagnostic tests are possibilities for consideration. Likewise, a negative or normal outcome (one which indicates a reduced risk) does not necessarily mean that the unborn child will not have a chromosomal abnormality.

Despite this uncertainty, first-trimester scanning has a detection rate of around 98 percent for pregnancy complications in which the unborn has Down syndrome and a slightly higher rate for pregnancies in which trisomy 13 or trisomy 18 are present. Even though a nuchal translucency scan can be done without bloodwork, without a maternal blood panel to cross reference, the success rate drops to around 70 percent.

Chromosomal abnormality probability is based on three criteria: maternal age, information obtained from the nuchal translucency ultrasound and early pregnancy bloodwork. The combination of these results can alert your doctor if there is an increased risk for one of these chromosomal disorders or on the other hand, provide reassurance that your baby is at a lower risk.

While scans might reassure you that your baby is growing correctly, they may also reveal that your child has an increased chance of developing a chromosomal abnormality. Thus, it is advisable to have a doctor and medical team you trust to help guide you through additional testing should the test reveal a high risk of chromosomal abnormality in your unborn child.

If there is any indication of an increased risk, further testing, such as chorionic villus sampling (CVS) or amniocentesis, both of which are more accurate than a nuchal translucency scan, may be recommended by your health care practitioner.

Preparing for the Test 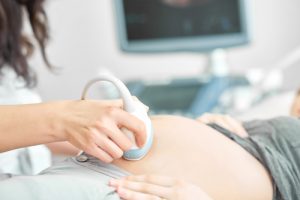 The most acceptable ultrasound image may be achieved with a full bladder. Two or three glasses of water are recommended to be consumed an hour before taking any examination. If you have a nuchal translucency scan scheduled, it is advised to avoid urinating immediately prior to the ultrasound test.

When it comes to sensations, rest assured knowing that ultrasound waves are too weak to be felt. The only sensations commonly felt are a mild chill and moist feeling from the ultrasound gel used in the exam, and as a result of the added pressure the ultrasound test can place, slight discomfort may be experienced for some women.

What is Normal Nuchal Translucency Measurement?

For most pregnancies, a nuchal translucency scan of less than 3.5 millimeters is deemed acceptable.

Until your baby is 14 weeks old, their nuchal translucency scan measurement usually increases as they grow. After this point, as mentioned before, the excess fluid is typically reabsorbed. So, even if a developing fetus does have a chromosomal condition, a later nuchal translucency scan may give a normal measurement. This is why it’s essential to do more tests or screenings for cross referencing results and present risk factors.

Should I get a Second-Trimester Screening?

The second-trimester maternal serum screening test, often known as the quad screen, is administered between 16 to 20 weeks of gestation and measures substances in the mother’s blood. Similar to the first-trimester screening, second-trimester quad-screening results can be utilized to statistically adjust risk for Down syndrome and trisomy 18, however not trisomy 13.

In addition, the Alpha-fetoprotein (AFP), a plasma protein produced by the embryonic yolk sac and the fetal liver, test, done between weeks 15 and 20 can identify pregnancies with a greater risk of other developmental issues such as open neural tube abnormalities like spina bifida.

It should be noted that some doctors do not advise quad screening be done if combined first-trimester testing has been completed. However, AFP can be obtained as a screening test for spina bifida on its alone.

While the list of potential risks and subsequent testing may seem overwhelming during pregnancy, together with a competent doctor, women should be able to decide whether prenatal diagnosis is something to consider and which screening or testing method is most appropriate.

Pregnancy Basics
Previous Post: « Umbilical Cord Knot: What You Need to Know
Next Post: What You Should Know About Fetal Distress »