Miscarriages are common in the first few weeks to months of pregnancy. The loss comes as spotting and ultimately the shedding of the endometrium. Progesterone is the hormone that strengthens the inner walls of the endometrium through thickening so that the attached embryo remains in place and forms a viable fetus. There is contention about the administration of progesterone to raise its levels and prevent early miscarriages.

Progesterone is the hormone that sustains pregnancy. In the early months of the pregnancy journey, the hormone comes from the ovaries. Once the placenta is well formed after this, it takes over the role of producing and secreting the hormone for the later stage of pregnancy. Miscarriage is common during the first three months. Often, this is traced back to the role of progesterone in strengthening the inner walls of the endometrium to carry the weight of the forming fetus. When the hormone does not support this effectively, a miscarriage is often imminent.

A substantive portion of pregnancies end in miscarriage within the first three months. Trials with hormone treatment are a promising signal in regard to the measures to prevent these cases, especially during early pregnancy. There are studies and trials that are now dedicated to finding the best way of keeping the pregnancy by managing progesterone and its production in the body. In cases where the amounts are not enough, artificial administration is then warranted to balance the quantities. 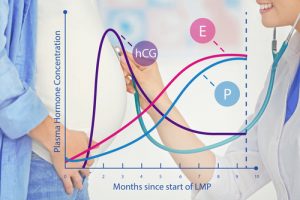 Research, studies and clinical trials have delved deeper to understand the role of progesterone in supporting pregnancy and averting miscarriages. The analyses and the results of two major clinical trials found that an application of progesterone booster to women with multiple miscarriages changed the cycle for the better. The studies have also proven that the boosters are safe and cause few side effects on the developing pregnancy and the forming embryo. The studies give hope and raise the chances of survival by scaling down the miscarriages during the early stages of pregnancy. The method is gaining widespread acceptance, especially in the developed world, where clinical systems have the structures to support its benefits.

However, accounts from those who have already received this treatment show a sense of false hope primarily. The advancements from the studies indicate little benefit in preventing much of the early miscarriages. Accounts from some recipients show that they opted not to have subsequent treatments, especially after experiencing disappointment with the first treatment. Additionally, it is not proven that the differences in progesterone levels among women is the main variable linked with abortive cases. Instead, efforts to prevent miscarriages should go towards rationalizing healthcare and access in ways that would increase quality and availability to all that need the services.

Similarly, the evidence from earlier studies is not shared across the clinical world. A large portion of evidence comes from the two studies and more that stands at stake with the inconclusive information. Cases like these need consensus across the industry to quantify the benefits and warrant treatment. One would say that the motivation remains unestablished, and more stands at risk in rolling out the progesterone administration as a standard for the industry.

There is a general lack of clarity about a single direction in progesterone administration to prevent early miscarriage. Current evidence is conflicted, with studies showing promise, while accounts from recipients show that it may be a false hope after all. The situation in the present calls for more time and attention on the studies and research before it is formally accepted as a standard in the industry. Until then, it is hard to quantify the benefits and acknowledge with certainty that there is an advantage to progesterone administration.

Progesterone in a woman’s body is the sole hormone that sustains pregnancy. Its production, levels and shifts can affect the integrity of pregnancy and the potential of going to term. Many pregnancies that end in miscarriage do so in the first trimester. Research remains inconclusive about the artificial administration of progesterone to sustain the pregnancy and carry it to full term.

Pregnancy Basics
Previous Post: « The Importance of Zinc Intake During Pregnancy
Next Post: Boosting Estrogen Levels for a Healthier Pregnancy »