Most people are familiar with the typical symptoms of pregnancy: swollen feet, morning sickness and mood fluctuations, to name a few. But perhaps the strangest and more humorous of token pregnancy symptoms would be that of pregnancy cravings—a woman’s desire for the oddest types of foods at odd hours at any cost. Where do these cravings come from and are these cravings a legitimate symptom, or is it just a myth, an exaggerated conspiracy on behalf of pickle makers around the world? This article will attempt to answer these questions and look into the science behind pregnancy cravings.

While no one really knows for sure why women seem to get these cravings, there are two general theories that researchers and doctors attribute them to (with the exception of gestational diabetes and pica—more on those later). The first theory has to do with nutrient or vitamin deficiencies. The second theory has to do with hormonal factors. Regardless of why they occur, it is generally accepted that they are indeed a symptom of pregnancy, as 60-90 percent of women will experience cravings of some kind during their pregnancy. 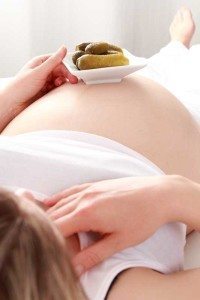 Many doctors feel that these cravings pregnant women get point to a vitamin or nutrient deficiency. This theory basically purports that the cravings are the body’s way of telling you that you need more of some vitamin or nutrient. By ingesting whatever food she’s craving, her body is correcting that deficiency. For example, a woman that craves pickles or other salty foods could be deficient in sodium. Or, a woman that craves ice cream may need more calcium. This theory makes a lot of sense, especially when you consider how much being pregnant literally drains your body, as your unborn baby essentially mocks the action of a parasite in some respects, sapping away nutrients. So it’s no big stretch to see how this theory is plausible.

Additional research points to changing hormones as the reason for pregnancy cravings. Like the previous theory, these theories are also logical since everyone knows that pregnant women experience a multitude of hormonal changes. There are a couple of hormones that come to play in this theory, leptin and neuropeptide Y (NPY). Leptin is a hormone secreted by fat cells that affects metabolism and appetite. Neuropeptide Y (NPY) is a substance also related to appetite, more specifically to increasing appetite via the hypothalamus in your brain. Recent research has shown that NPY production is increased during pregnancy, perhaps explaining some of the cravings some women experience.