During every mother’s pregnancy, there are often concerns about food intake and overall weight. However, one key aspect that not every pregnant woman considers is how much their pregnancy diet will predispose their growing infant to certain food allergies. Allergies and pregnancy are a very important subject since it can affect the rest of the child’s life.

Studies conclusively show that a baby has a 30 percent chance of subsequently developing infant allergies if the mother-to-be already has allergies. Also, there’s a 60 percent chance for the fetus to get baby allergies if both of the parents have them as well. Furthermore, if both parents have the exact same allergy, the risk for the baby increases up to 80 percent. While there’s no specific evidence that the mother’s diet during the initial stages of pregnancy can influence the growing fetus, there is evidence that both diet and physical activity during the last trimester may contribute in preventing certain allergic issues from developing in the infant. Therefore, it’s clearly beneficial for the mother-to-be to understand this key research and to follow good prenatal care for a healthy pregnancy.

An Apple a Day Keeps the Allergist Away

Incredibly, if the mother-to-be eats apples while she’s pregnant, it can protect the infant from developing asthma or other similar symptoms and avoid newborn allergies altogether. Research scientists from Scotland and the Netherlands led by Professor S.M. Willers from Utrecht University conducted a study and tracked the daily diets of 2000 pregnant women and then proceeded to examine the lung health of more than 1,250 children of the resulting children. Their research revealed astonishing results. The children of the mothers who consumed at least four apples a week were actually 37 percent less likely to experience wheezing problems and as much as 53 percent less likely to develop asthma. The research was explicitly related to apples rather than fruit juices or fruit in general. Many of the researchers think that the results may have a lot to do with the phytochemical content of apples, including flavonoids, which have been shown to have a strong, positive impact on the lung function in adults. Therefore, every mother-to-be should literally eat an apple a day, along with everyone else.

Fat is Sometimes Good for You

A revealing study published in April 2004’s issue of a magazine called Allergy points out the connection between omega-6 fatty acids, omega-3 fatty acids and allergies regarding the fetus in the womb. Researchers studied the colostrum from the mothers with kids who had a higher risk of developing allergies overall. They discovered that where the two fatty acids were out of balance during the pregnancy diet, they had the potential to produce allergy problems in young children. Many typical food diets in the West consist of a low level of omega-3’s and a higher level of omega-6 fatty acids. Both fatty acids are crucial for the mother-to-be’s diet in the right balance and in moderation as well. Another interesting study out of Linkoping University in Sweden analyzed infants from certain families with higher risks for developing asthma and allergies in general. A few of the mothers consumed a fish oil supplement starting at the 25th week of their pregnancy up until the third month of breastfeeding their infants while others did not. When the babies were examined after one year, they discovered that the children of the mothers who took the supplement had considerably fewer allergic reactions overall. In fact, they had less than 50 percent of the number of reactions to certain foods like eggs that are an initial indicator of asthma and eczema. Other studies have previously illustrated that taking high doses of fish oil during the second trimester of the pregnancy can greatly help the baby’s brainpower and coordination skills later on in life. 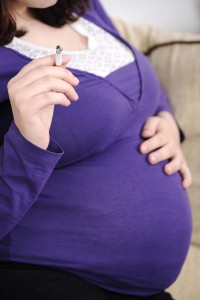 Not all allergy producers actually come from food. Studies show that one of the main culprits behind baby allergies is smoking. It’s been shown time and time again that pregnant mothers who smoke increase the risk for their babies to develop subsequent allergies. If the infant is born and raised in a household where people smoke, the risk increases substantially. Although some babies are born with specific genetic markers that are inescapable, there are a few precautions that pregnant moms can incorporate into their diet and their lifestyle in order to lower the risk. For starters, it’s crucial to eat a highly nutritious diet and to exercise every day, or at least three times a week. Also, adequate sleep is a vital factor in keeping the growing fetus healthy. By following these healthy guidelines, pregnant mothers can greatly help in preventing their growing babies from developing common allergies.