Pregnancy is a beautiful and fantastic time in a woman’s life. However, it can also be a time of great stress and anxiety. One of the things that can cause stress and anxiety during pregnancy is the possibility of complications. Choriocarcinoma is an infrequent cancer condition, but it can be perilous for both the mother and the baby.

The good news about this rare but severe complication that can occur during pregnancy is that choriocarcinoma cancer can be effectively managed with early diagnosis and treatment.

In short, choriocarcinoma is a rare but aggressive type of cancer that can develop during pregnancy. It occurs when cancerous cells from the placenta invade the woman’s bloodstream. While this cancer is rare, it is the most common type of gestational trophoblastic disease (GTD). GTD occurs when abnormal cells grow in the tissues that usually become the placenta.

Cancer for most women with choriocarcinoma will go away after the baby is born. However, in some cases, cancer can spread to other body parts and become life-threatening. This is why it is crucial for women to be aware of the symptoms of this cancer and to see their doctor if they experience any of them.

There are often no symptoms in the early stages of this cancer. As cancer grows and spreads, the following symptoms may develop:

Vaginal bleeding is the most common symptom of this cancer. It may be heavy or light and can occur at any time during the pregnancy. It can occur even if the woman has never had a vaginal bleed during her pregnancy.

Abnormal uterine bleeding is any bleeding that occurs outside of the normal menstrual cycle. This can include bleeding after sex, between periods, or after menopause.

Who Is Most at Risk of Choriocarcinoma 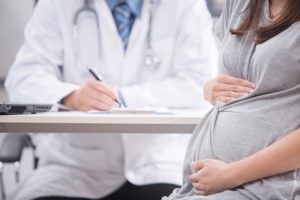 While this cancer can occur in any woman, certain factors can increase the risk. These include:

History of Miscarriage or Abortion

A molar pregnancy is a type of gestational trophoblastic disease (GTD). It occurs when the cells that should become the baby begin to grow abnormally. Molar pregnancies usually end in miscarriage, but in some cases, they can develop into this cancer.

Pregnant women with twins or higher order multiples are at an increased risk of developing this cancer. This is because they often have a higher level of the hormone HCG, which can lead to the development of cancerous cells.

Women who are under the age of 20 or over the age of 35 are at an increased risk of developing this cancer. This is because they are more likely to have a higher level of HCG.

If you are diagnosed with this cancer, there are several treatment options available. These include:

Choriocarcinoma is a rare but severe type of cancer that can occur during pregnancy. If you are diagnosed with this cancer, there are several treatment options available. These include chemotherapy, surgery, radiation therapy, and targeted therapy. With proper treatment, most women with this cancer can be cured.