When it comes to pregnancy, a miscarriage is one of the most emotionally painful experiences a woman can go through. Sadly, miscarriage is a common occurrence, around 10 percent of pregnancies end in miscarriage, and they can result for a number of reasons.

It’s natural to feel a myriad emotion during pregnancy. From pure elation to that constant underlying concern about every change or pregnancy side effect. These concerns are especially present if you have already experienced a miscarriage before, and overcoming those previous fears can be a challenge.

While it cannot be predicted or prevented in many cases, knowing the signs and symptoms of a miscarriage may help you respond to protect your well-being and can be important to be able to identify if your pregnancy might be in jeopardy.

Understanding the Causes of Miscarriage

Miscarriage can occur in women of all ages, but the risk increases significantly in women over the age of 45. Typically, miscarriage occurs most often before the 20th week of pregnancy, however, the risk of pregnancy loss decreases once the pregnancy reaches seven to 10 weeks, when baby’s heartbeat is heard.

The most common cause of miscarriages is chromosomal abnormalities. As devastating as they are, these are problems that cannot be predicted nor prevented. According to the American College of Obstetricians and Gynecologists (ACOG), roughly 50 percent of early pregnancy losses are a result of these types of chromosomal abnormalities in the fetus or embryo. 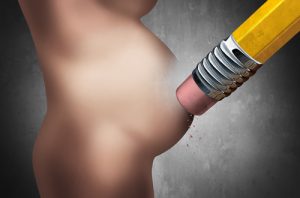 Additional causes for a miscarriage include:

While scientists have been able to uncover these number of reasons why a miscarriage occurs, in many cases, the identifiable cause remains a mystery.

In essence, spotting is a term used to described appearance of spots of blood during pregnancy, and in many cases, light spotting can actually be considered normal, as spotting differs from actual bleeding and may not be cause for alarm. Around 20 percent of pregnant women experience spotting during their first trimester.

Sometimes, when spotting occurs in early pregnancy, it’s known as implantation bleeding. This happens within six to 12 days after conception when the fertilized egg implants itself in the uterus. For many women, implantation bleeding is merely considered a light period as they don’t yet realize they’re pregnant.

Though most miscarriages occur within the first 12 weeks of pregnancy, and the potential that spotting indicates a miscarriage is frightening, about half of pregnant women who experience light spotting do not miscarry. Often, spotting is not indicative of miscarriage, while heavier bleeding with clots and cramping in the lower abdomen or back may mean you’re miscarrying.

Regardless of mere spotting, you may want to mention the spotting frequency and volume with your doctor so they may examine you or provide an ultrasound to check on your baby to ensure there is no cause for concern.

As mentioned before, the most common cause of miscarriages is chromosomal abnormalities, because of the timing, some symptoms of early pregnancy loss are similar to those of a regular period.

The fact is, in some cases, due to the number of new changes the body is going through during pregnancy, detecting a miscarriage can be a confusing process. Some of the most common symptoms of experiencing a miscarriage are as follows.

Though knowing the signs and symptoms of a miscarriage is helpful, it is always best not to assume if you are having one or not. If you believe you are experiencing a miscarriage, consult your doctor; it may be another issue that is causing your concerns.

Signs of miscarriage include vaginal bleeding, blood clots and severe cramping in the abdomen or lower back.

How Can Miscarriages be Diagnosed?

While miscarriage may not be entirely unavoidable, there are some things you can do to help reduce the risk of miscarriage such as participating is regular gentle exercise, following a pregnancy-safe diet, taking prenatal vitamins and avoiding high risk lifestyle choices such as smoking and excessive drinking.

If you have experienced a miscarriage, it’s important to not lose hope. You can go on to conceive a perfectly healthy child when you’re both physically and emotionally ready.