It is possible for women to maintain healthy pregnancies despite being stricken with colitis or Crohn’s disease. Even though each illness might impact an expecting woman, there are steps afflicted individuals can employ to ensure their health and the health of their unborn child.

What Are Colitis and Crohn’s Disease?

These autoimmune illnesses affect a person’s digestive tract, especially the intestines. Medical professionals categorize both ailments as inflammatory bowel disease (IBD), which are characterized by a major inflammation that strikes the digestive system. Either ailment can precipitate a variety of bothersome and, on occasion, serious and dangerous symptoms such as diarrhea, constipation, gas, bloating, abdominal pain, the feeling of complete evacuation following a bowel movement, fatigue, weight loss, increased body temperature, appetite loss, and night sweats. More serious manifestations of either illness can result in potentially life-threatening complications, including bleeding or bowel obstruction.

Many health professionals opine that women impacted by IBD can become pregnant and carry healthy babies to term. However, the condition requires close monitoring by a physician. Additionally, there are specific issues women should take into consideration if they are affected with either condition and plan to become pregnant. They should consider the following:

The Best Time to Become Pregnant Is During Remission 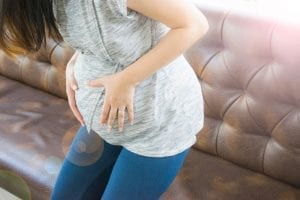 IBD does not typically continue endlessly. Stricken individuals often experience periods of inactivity, known as remission, and periods of active illness, referred to as flare-ups. Most doctors agree that a period of remission is the best time to conceive, and the duration of disease inactivity will last the entire gestation period.

That said, it is possible for women to conceive and be pregnant during a flare-up. Healthcare professionals, however, do caution that ladies experiencing periods of the disease’s activity are at an increased risk of facing more serious physical manifestations of each illness. Moreover, active flare-ups also increase the risk to expecting women’s unborn children and result in major events such as miscarriages, premature births, difficult labor, and delivery challenges.

One of the most effective preventive methods a pregnant woman may employ is to observe a healthy diet. Specific foods and beverages can trigger a host of digestive problems. Colitis and Crohn’s disease are no different.

Physicians recommend that impacted women avoid spicy, greasy and fatty foods, in addition to avoiding edibles known to cause gas, dairy products, and alcoholic or highly caffeinated beverages. Beneficial foods are those that are high in fiber, as is water, which should be consumed frequently. Furthermore, pregnant women with IBD are advised to augment their diets with vitamin supplements.

It is important to note that every person’s dietary needs can be different. Health professionals also suggest that women in question work with their healthcare providers, nutritionists, and dietary professionals to create a meal plan that best fits their circumstances and nutritional requirements.

Pregnant women might also avoid flare-ups by limiting their exposure to stress. As is the case for many other illnesses, IBD can be precipitated or exacerbated by excessive levels of tension and anxiety.

Observing a healthy diet and avoiding stress might also ease the symptoms of an active flare-up. However, the manifestations of IBD might also be alleviated through physical activity. The amount of exertion expecting women should partake in will depend on the stage of the pregnancy, their overall health and physical condition. Women in such circumstances are strongly advised to discuss any planned exercise regimen with their physician before starting.

When necessary, certain medications might be indicated. That said, some drugs have the potential to precipitate adverse impacts to mother and baby. A doctor might prescribe specific drugs based on the severity of the condition and how such medications might impact the unborn child.