Crohn’s affects many aspects of a woman’s life, but it shouldn’t hinder her from having a normal pregnancy and healthy baby. Nonetheless, it’s important for women with this disease to talk to their doctors before getting pregnant, as there are some potential health complications.

What is Crohn’s Disease?

Crohn’s is an inflammatory bowel disease that is caused by the inflammation of the gastrointestinal tract. This condition tends to impact the end of the small bowel through to the colon. It is not restricted to these areas, however, and can affect the length of the gastrointestinal tract. This distinguishes it from ulcerative colitis, another type of inflammatory bowel disease that only affects the colon.

What Are the Symptoms?

When the GI tract becomes inflamed, specific symptoms are the result. These include rectal bleeding, pronounced abdominal pain, constipation, diarrhea and the feeling of incomplete evacuation. Some women also experience irregular menstruation, fatigue, weight changes, fever, sweats and a diminished appetite. Women who regularly experience these symptoms should get tested for Crohn’s. As this is a chronic disease, there is no one cure. With the appropriate treatment, however, many women learn to manage and alleviate many of their symptoms.

Does It Affect Pregnancy? 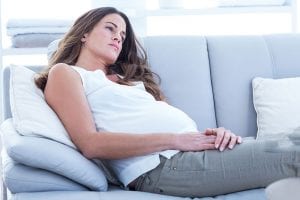 Crohn’s doesn’t necessarily affect a woman’s ability to conceive and carry a healthy child, but about a quarter of all women suffer from a flare-up of Crohn’s during pregnancy. However, if a child is conceived during a flare-up of Crohn’s, it can increase the chances it will persist throughout the duration of the pregnancy. This puts women at greater risk for premature deliveries, miscarriages and other issues. Because of this, most doctors advise that women with Crohn’s conceive while they’re in remission. It’s best to aim for conception at least three months into a cycle of remission.

How Can Women Manage Crohn’s During Pregnancy?

Most of the medications prescribed for Crohn’s can be taken throughout the pregnancy. Indeed, most doctors advise that Crohn’s patient maintain their standard prescription regimen throughout, as it helps to ensure a safe, healthy pregnancy.

What Medications Should Women Take During Pregnancy, and Which Should They Avoid?

There are certain considerations, however, as not all of the medications associated with Crohn’s Disease are ideal for pregnant women. Aminosalicylates can be taken during pregnancy, though some of them may cause heartburn. Corticosteroid usage depends on the phase of pregnancy. At the beginning of a pregnancy, doctors recommend that women stop steroid use. After the initial period, however, most women are able to safely restore steroids to their medication regimen.

Immunomodulators are also well tolerated, and biologics are a similarly low risk. Doctors may ask pregnant patients to stop taking biologics near the end of pregnancy, however, as they can negatively impact the placenta at these later stages.

Thalidomide should always be avoided, as it can lead to severe birth defects or fetal death. Certain types of antibiotics can be used during pregnancy, but only under close medical supervision. No matter which preparation it is: Only a doctor can decide if the application is safe!

What About the Delivery?

Sometimes, women with Crohn’s develop abscesses and fistulas during pregnancy, usually occurring around the vagina and rectum. When this happens, many doctors recommend a Caesarian section. Otherwise, women with this condition can expect a normal delivery.

Pregnancy Basics
Previous Post: « 13 Myths About Vaginal Birth After Cesarean
Next Post: The Importance of Iron Intake During Pregnancy  »