Should you be concerned about enjoying salt and caffeine during pregnancy? Experts believe excessive consumption adversely affects both the expectant mother and her unborn child.

85 percent of Americans drink at least one caffeinated beverage a day. For an average nine-month pregnancy that’s over 280 servings! And according to the CDC, 90 percent of Americans get more than twice the sodium they need on a daily basis, so too much salt can become a problem for an expectant mother, too.

When it comes to facilitating a healthy pregnancy, most women will find it necessary to cut back on the quantities of salt and caffeine that they are used to ingesting. But is even a little too much of these two culinary favorites actually dangerous?

Physicians routinely caution women to avoid even over-the-counter medications during their pregnancy, especially during the developmentally critical first trimester. However, it’s easy to forget that caffeine is also a drug. Because it’s a stimulant, caffeine raises the blood pressure as well as your heart rate. The resultant heart palpitations are a common side effect of having too much caffeine in the system.

Caffeine is also a diuretic, meaning the body loses fluids which may be healthier for a pregnant mother to retain. This results in dehydration and fatigue. A Danish study also found that pregnant women who drank large amounts of caffeine, about eight cups of coffee daily, had a higher risk of miscarriage. However, this risk was specific only to the caffeine found in coffee.

While adults possess chemicals in their bodies which allow them to break down caffeine efficiently, unborn babies lack that advantage. As a result, the caffeine stays in the child’s bloodstream longer. The resulting symptoms are the same as for their mother; a dangerously high heart rate coupled with the loss of bodily fluids.

Research shows Americans prefer to drink their caffeine, obtaining over 95 percent of their annual intake through a variety of beverages. Because people typically only think of avoiding chocolate candies and coffee, expectant mothers aren’t always alert to other common sources of caffeine such as soft drinks, teas and energy drinks. They’re also unlikely to remember to avoid caffeine from more unlikely sources such as over-the-counter prescription drugs.

How much is too much? While most health care providers recommend eliminating all caffeine from your diet while pregnant, many women find this difficult to do. Because it’s a drug, caffeine is addictive. And after a lifestyle of coffee drinking, a sudden cessation may result in withdrawal symptoms. Nevertheless, to protect themselves and their child, pregnant women should try to avoid all caffeine, if possible. 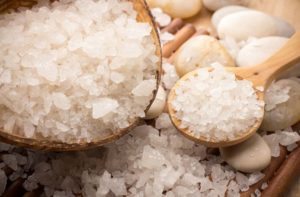 Unlike caffeine, salt is a nutrient that is an important part of the diet. Since women naturally retain additional fluids during pregnancy, they usually require a little bit more sodium than when they aren’t pregnant. However, too much salt can be as much of a problem as too little.

While some swelling of the hands, feet and legs is normal during pregnancy, consuming more salt than you need can make the swelling worse. Likewise, an excessively high salt intake causes the body to lose calcium. This increases the possibility of the mother developing pre-eclampsia, a dangerous, pregnancy-induced form of hypertension.

As with monitoring the consumption of caffeine, identifying sources of excess salt can be unexpectedly difficult. Many foods that you don’t expect to contain salt have unexpectedly high sodium levels. This includes ready-to-eat breakfast cereals, vegetable juice cocktails and many spices and condiments. How much is too much? Around 2,400 milligrams, or roughly a teaspoon, of salt is the recommendation.

Many minerals, and yes, drugs, that are perfectly safe in moderation when you are not pregnant, may cause problems for both a woman and her developing child. It’s best to exercise caution when it comes to prenatal nutrition. Because they both can affect the levels of fluids in the body, avoid caffeine during pregnancy and watch your salt intake. Regular check-ups are the most important way to monitor the effects of caffeine and salt intake and the best way to help keep both mother and child healthy.