At the beginning of week two, you ovulate. If a sperm penetrates your egg, it is fertilized 12 to 24 hours later. During the next several days, the fertilized egg begins to divide into multiple cells as it makes its way down the Fallopian tube, enters the uterus and begins to burrow into your uterine lining. 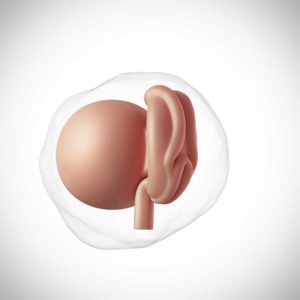 At week four, your baby is now called an embryo and it’s approximately the size of a poppy seed. In week four, the embryo divides into two pieces. One piece becomes the placenta, which delivers oxygen and nutrients to your developing baby throughout your pregnancy. The other piece continues to develop into what will become your baby. During the fourth week, the neural tube also starts to form. The neural tube is where your infant’s spinal cord, brain and backbone will eventually develop.

In week nine, the gallbladder, pancreas and reproductive organs are beginning to develop. Your baby is called a fetus at the end of week 10. In addition, his bones are beginning to harden, his kidneys are now making urine and his brain is developing approximately 250,000 new neurons per minute.

Your infant begins to develop his reflexes at 12 weeks. They will begin to open and close his fingers, start to make sucking movements with his mouth, and curl his toes. They will be able to feel it if you gently touch your stomach, and he may move in response, but you won’t be able to feel him moving yet.

After the first trimester of your pregnancy, the chance of a miscarriage occurring decreases. In addition, early pregnancy symptoms such as fatigue and morning sickness subside for many mothers-to-be.

By 13 weeks, all of your baby’s critical organs and systems have developed. Additionally, during this week of pregnancy, your baby’s eyes move from the sides of her head to the front and her ears move from their neck into their appropriate places. Your baby’s arms also get longer and they can now suck their thumb.

If you’re having a girl, her ovaries are moving into her pelvis, and if you’re having a boy, his prostate is forming in week 14 of your pregnancy. Your baby can begin to make facial expressions in week 15. In week 16, your baby’s bones continue to harden, though they will remain somewhat flexible so that he can pass through the birth canal more easily. The umbilical cord has fully formed at this point. Additionally, if you are having a girl, thousands of eggs are developing in her ovaries.

The placenta is nearly as large as your baby by week 17. In addition, your baby’s trunk, legs and arms are more proportional in size to his head, and they begins to form fat deposits under his skin. The bones and nerves in your baby’s ears have developed enough to function in week 18. They can hear the blood traveling through the umbilical cord, your stomach growling and noises outside your body. Now is a good time to start talking to your baby and playing music for them.

Vernix starts to cover your baby’s skin at week 19. Vernix is a white cheese-like coating that safeguards your baby’s skin while she is in the amniotic fluid and helps regulate body temperature. Eyebrows and lashes appear in week 22. In addition, your baby’s first bowel movement, meconium, forms in their intestinal tract. At this time, your baby will become more active, and you will be able to feel them move. Their sense of touch has also developed by this time, and their taste buds are beginning to form as well.

By week 23, your baby’s inner ear has completely formed. The inner ear plays an important part in balance. Your baby may be able to tell if they are upside down or right side up in your womb. Fingerprints and footprints start to form in week 26. Additionally, your baby’s lungs form air sacs at this time, but the lungs are not yet ready to function outside of the womb. 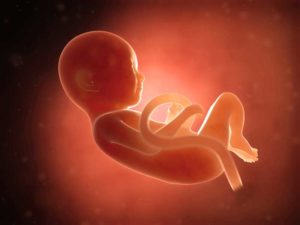 At the beginning of the third trimester, your baby is approximately the size of an eggplant. From about week 30 on, your baby will gain approximately one-half a pound each week. The fat they gain will help them control their body temperature after they’re born. By week 32, all of your baby’s major organs and systems are functioning except for his lungs. Nearly all babies born at 32 weeks survive.

At week 33, there isn’t much room in your uterus for your baby to move around, so you may notice that your baby begins to be less active. The vernix protecting your baby’s skin will begin to thicken around week 34. Your baby’s kidneys are fully formed, and her liver is able to process some waste at week 35.

At 37 weeks, 97 percent of babies have turned so that their heads are facing the cervix in preparation for the trip down the birth canal. At this point, your baby’s coordination has developed enough that he can grasp things with his fingers.

If you’re having a boy, his testicles have descended into the scrotum, and if you’re having a girl, her labia are now completely formed at 38 weeks. By 39 weeks of pregnancy, most of the vernix protecting your baby’s skin has disappeared.

While a full-term baby is delivered at 40 weeks, only about 5 percent of women deliver on their estimated due date. If you are a first-time mother, you may wait up to two weeks after your due date before you deliver your baby. When your baby arrives, they may be covered in vernix and blood and have dry patches, rashes or discolored skin. All of this is normal. Your baby may also have a misshapen head, but it will round out shortly after you give birth.

Pregnancy is an exciting time. Your baby grows and develops quickly over the course of your pregnancy. In the short span of 40 weeks, your baby goes from being a microscopic ball of cells to a fully developed infant.

For those who are new to the term, your pelvic floor muscles support your bladder, bowels and uterus. Pregnancy and childbirth can weaken these muscles, but exercises can rebuild their strength.

Symptoms and Changes
Previous Post: « Is Consuming Salt and Caffeine During Pregnancy Dangerous?
Next Post: Tips for Getting a Balanced Combination of the Proper Nutrients During Pregnancy »