Expecting mothers can better protect their babies when they learn more about the causes, symptoms and treatment of placental abruption.

What Is Placental Abruption?

The placenta serves a variety of purposes. It attaches itself to the wall of the uterus and surrounds the fetus to act as a conduit for the exchange of oxygen and nutrients between the mother and child. It also helps extract waste from the blood supply of the fetus. Considering the many functions that a placenta serves, it’s easy to see why maintaining a healthy connection between the placenta and uterus is essential.

A placental abruption occurs when the placenta becomes separated from the wall of the mother’s uterus. Even in a partial abruption, which means a portion of the placenta is still attached to the uterine wall, the development of the fetus will be affected. This detachment means the baby isn’t receiving the necessary amounts of oxygen and nutrients for healthy development. It may also cause the mother to suffer from heavy internal bleeding.

Causes of This Pregnancy Complication 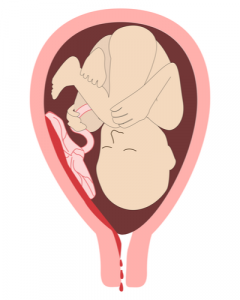 The exact causes of an abruption aren’t known, but trauma may be a primary cause. For example, a traffic accident may be violent enough to tear the placenta from the uterine wall. An accidental fall is another situation in which damage may be done to the link between the uterus and the placenta.

Other risk factors for an abruption include the following:

While there’s no way to guarantee you won’t suffer from a placental abruption, you can take steps to minimize the risks. This should include refraining from smoking and other high-risk behaviors. Be sure to wear a seat belt anytime you’re traveling in a vehicle, bus or subway. You should also ask your doctor for tips about keeping your blood pressure regulated.

When an abruption occurs, treatment will be different based on the stage of your pregnancy. The placenta can’t be reattached under any circumstances, so you should be aware that this won’t be an option. If your pregnancy is at 34 weeks or less, expect to spend some time in the hospital. You will be observed for internal bleeding, and your baby’s heart rate will be watched closely. If there doesn’t seem to be internal bleeding, you’ll be able to go home. At home, you’ll be restricted to bed rest, and you may have to take medication to help your baby’s development.

If you’re more than 34 weeks pregnant, your doctor will have to determine if a vaginal birth is still a viable option. In some cases, an emergency C-section may be necessary to deliver the baby safely. The operation may also require a blood transfusion to replace any blood you lost through the abruption.

What Are the Complications for Mother and Child?

The mother may also suffer lasting consequences as a result of the abruption. She may also go into shock as a result of the internal bleeding and blood loss. The mother may also suffer from disseminated intravascular coagulation, which is a condition in which the blood has difficulty clotting. While disseminated intravascular coagulation can be treated, it will require hospital care, including the intravenous replacement of fluids and blood transfusions.

Pregnancy Basics
Previous Post: « Uterine Fibroids and Pregnancy: Everything You Should Know
Next Post: What Every Pregnant Woman Need to Know About Labor Dystocia »