Pregnancy can be a time of many fears, particularly for first-time mothers. New parents are hopeful that everything about pregnancy and delivery will remain within normal expectations and the outcome will be a happy, healthy baby. However, with so many new terms, conditions, physical changes and nuances of pregnancy to understand and experience, the unknown can produce great fear and stress for both mother and the unborn child growing inside of her. There are many changes that happen to the body during a normal pregnancy. Some of those changes may appear to be abnormal as they happen. A first time experience with something like spotting or light bleeding from the vagina during pregnancy can wreak havoc on the expectant mother’s nerves and send waves of fear, even panic, throughout her. For the newly pregnant, knowing facts about physical changes and which ones are normal can alleviate many fears. Simple information can prevent sleepless nights and end persistent worry about the baby’s health. Spotting in early pregnancy is a good example of something that can be entirely normal as part of pregnancy in the first stages. Yet, spotting can also be a sign of a problem. It is important to understand spotting, so it is more clear as to when everything is likely fine, when a doctor should be called or when an emergency is in progress. 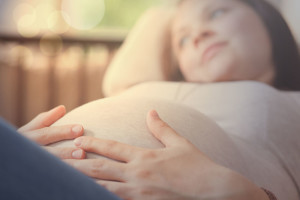 In essence, spotting is a term used to described appearance of spots of blood during pregnancy. The pregnant woman will notice spots of blood in her clothing or near the vagina. Spotting and bleeding are considered to be different experiences altogether. In pregnancy, bleeding from the vagina means an actual flow of blood which may be continuous or intermittent. Spotting is just a drop of blood or several drops at a time, likely only noticed upon removal of clothing or when going to the bathroom. When consulting a physician during pregnancy, the doctor will appreciate the patient’s understanding of spotting versus bleeding, because that differentiation may lead to a more efficient determination of the cause.

Spotting in the First Trimester

According to the National Institutes of Health, about 20 percent of pregnant women experience spotting during the first trimester. This is often normal and no reason to panic. Regardless of the amount of spotting, it is always advisable to notify the doctor so he or she may provide an examination, check on the baby’s well-being and find the reason for the light bleeding.

The first trimester of pregnancy is 12 weeks long. During this time, much is happening in the womb, even though your baby is still quite tiny. In fact, many women do not yet know they are pregnant when spotting first occurs. They may mistake light bleeding for a low-flow period. At these earliest stages of embryonic and fetal development, spotting could mean one of the following events have occurred or are in the process of occurring:

What to Do When Spotting Occurs 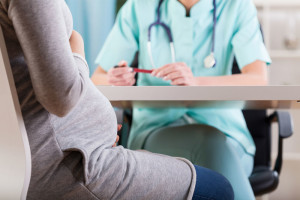 Spotting differs from bleeding in the sense of the amount of blood that is present. Spotting or bleeding at any point during a pregnancy should be investigated by the doctor. Do not insert a tampon or have intercourse during any spotting or bleeding in a pregnancy. It is a good idea to use a menstrual pad when spotting occurs so there can be clarity about how much bleeding is occurring. There may also be variations of the blood’s consistency, color or texture and the doctor will need to know about these variations. For example, pink, brown or red blood may be shed and those colors can help your doctor know what may be causing the bleeding. The blood may be of a normal consistency or could be full of clots. Also, any tissue which is passed from the vagina should be collected and taken to the doctor for testing. The doctor may order an ultrasound to gain better perspective toward a diagnosis. This may include both abdominal and vaginal ultrasounds. If any of the following symptoms accompany the bleeding, 911 should be contacted right away:

Despite the prevalence of lying in a hospital bed during labor, the pain of labor can be exacerbated by lying down. When it comes to labor planning, be sure that you are able to move as you need to help reduce your pain and anxiety and help your labor progress.

Symptoms and Changes
Previous Post: « Can an Ultrasound Gender Prediction be Incorrect?
Next Post: The Importance of Carbs During Pregnancy »