Is it possible to predict the gender of your baby? Though the only way to be sure is to have an ultrasound, many cultures have ideas about how to tell if you’re having a boy or a girl. Read on to learn about some fun baby gender prediction methods you might want to try if you’re curious about the gender of your impending little one.

The Proof is in the Body

According to conventional wisdom, one way to predict gender is by the size, shape and position of your bump. Carrying high might mean a girl, while low could mean you’re expecting a boy. As far as size, getting big all over usually makes people guess girl, while some say that those carrying a boy are all belly. Another myth says that “girls steal your beauty,” so if you’re experiencing pregnancy acne, oily skin, and a widening nose, you just might want to shop for pink. Cold hands and feet? Myth says it’s probably a boy.

Listen to Your Heart

The Chinese gender chart was supposedly found in a royal tomb more than 700 years ago. It predicts whether you’re having a boy or a girl based on when you conceived and how old you were at that time.

Sugar and Spice and Everything Nice 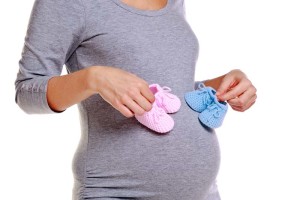 Have you been experiencing pregnancy cravings? Some people say that craving sweets means you’re expecting a girl, while cravings for salty, sour or spicy foods point to boy.

Give it a Ring

One old wives’ tale instructs you to tie your wedding ring to a long string and dangle it over your baby bump. If it swings in circles, this myth says boy, while back and forth spells girl all over.

Spell Out Your Symptoms

Feeling queasy in the morning? Legend has it that morning sickness means you’re expecting a girl, while women who feel pretty good throughout their pregnancies tend to have boys. While you shouldn’t decorate your nursery in pink or blue based on the result of these baby gender prediction methods, it’s fun to give them a try and see which hold true for you.

Preparing for Baby
Previous Post: « What to Expect During Your First Trimester
Next Post: Common Pregnancy Concerns »