Container-baby syndrome has serious consequences for infants, and parents must understand how to balance safety with opportunities for free play.

It only takes a quick stroll around any baby store to realize that parents today have a ton of options for keeping their babies contained. In fact, many of the top infant containers are even covered in toys and gadgets that make them seem educational since they encourage reaching and grasping.

While there’s nothing wrong with having your infant sit in a bouncer for a minute while you handle a quick responsibility, leaving infants there too long leads to problems. Container-baby syndrome is a real concern for anyone whose little one is often confined to carriers and other types of containers.

Babies need to be able to move freely to develop their motor skills as well as their understanding of the world around them. When infants are unable to move their bodies in different ways, they can develop a collection of symptoms that demonstrate that their development is being hindered. For instance, an infant may develop decreased movements or coordination. Parents may note that their child is not hitting development milestones, such as rolling over, at an appropriate time.

What Pieces of Equipment Are Considered Containers?

Just about any type of equipment that holds your little one in a specific place qualifies as a container. However, it should be noted that some are worse than others. For example, an exercise that allows your child to bounce and turn around is slightly better than leaving the infant confined in a stroller that only lets him or her sit in one position.

It should also be noted that certain containers, such as car seats, are unavoidable. Your infant may need to be temporarily strapped into a container for safety purposes, but you should try to balance that out by giving your baby free play as soon as possible afterwards.

What Effects Can This Have on an Infant? 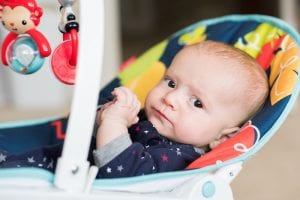 The short-term effects on an infant often include more frequent crying or refusing to sleep as the baby tries to express discomfort. Eventually, many babies get used to being in a container, and this may be why it seems like your baby is soothed by being stuck in a swing or bouncy chair. Over time, the syndrome includes negative effects on your baby’s physical health, such as the development of a flat head or an asymmetrical face. This happens as a result of the pressure that being in one position places on the baby’s bones. Torticollis, or muscle tension, on one side of the neck may make it hard for your baby to turn his or her head in certain directions.

Your infant can also develop issues with cognitive abilities. Since the baby receives less stimulation while stuck in a confining environment, the infant may have trouble with his or her vision and thinking skills as he or she grows. Some babies also become obese due to the inability to move enough to burn off calories and build muscles. There is also a possibility that infants with container syndrome may grow up to develop ADHD.

What Is Considered Too Long to Be in a Carrier?

There is not a hard and fast rule regarding how long babies can safely be left in a carrier. However, it is known that it is better for babies to be allowed to engage in free play in safe areas that have enough room for them to move around. If your child is not eating, sleeping or in the car, then he or she should be able to roll, kick and crawl as much as he or she wants.

What Are the Best Ways to Provide Free Play?

Giving babies opportunities for free play should always be done with safety in mind. Consider setting up your infant with a clean area on the floor where he or she can move around while you engage him or her with fun toys such as rattles and textured balls. If your infant does need to be confined, then choose areas that allow the baby to move more, such as a crib or large playpen.

Your infant deserves every opportunity that you can arrange to move his or her growing body and learn more about the world. Although you may occasionally need to place your infants in strollers or car seats, being aware of how long they are in there and giving them a safe place to play later helps them to continue on the path of proper development.

Postpartum Basics
Previous Post: « 5 Ways To Feel Confident When Pregnant
Next Post: How You Can Still Drink Coffee When You’re Pregnant »