Almost half of all adults in the United States will develop at least one mental illness during their lifetime, and women are almost twice as likely to experience depression compared to men, according to the CDC (Centers for Disease Control and Prevention).

New research was published in the Biological Psychiatry Journal that helps characterize how and when during brain development the risk begins to differ in females and males, when it comes to psychiatric disorders like anxiety and depression. The study supports the idea that maternal stress during pregnancy could alter the developing fetus’ brain connectivity, meaning that vulnerability for the development of a mood disorder is getting programmed from birth.

Pregnancy and High Levels of Cortisol

A collaborative research team at the University of California Irvine, Charite University of Medicine Berlin and OHSU in Portland Oregon discovered that high maternal levels of the stress hormone cortisol while pregnant increase depressive-like and anxious behaviors in females at the age of two. This effect that elevated maternal cortisol has on their behavior seems to stem from the stronger communication patterns between the brain regions which play an important role when it comes to sensory and emotion processing.

Alice Graham, a postdoctoral fellow at OHSU School of Medicine in behavioral neuroscience and the author of the study, noted that male offspring of mothers that had high cortisol while pregnant did not show an association between the maternal cortisol and mood symptoms. They also did not demonstrate a stronger brain connectivity. She also pointed out that these discoveries suggest that there is a potential pathway through which, in the prenatal environment, high stress could lead to differences in females and males in terms of susceptibility to different psychiatric disorders.

According to Dr. Graham, the study measured maternal cortisol in a more comprehensive matter compared to prior research. Senior author Claudia Buss from the University of California Irvine and Charite University of Medicine Berlin measured cortisol levels with her colleagues in order to estimate the overall level during pregnancy over multiple days in the early, middle, and late stages.

The measurements included in the study, which were taken from 70 mothers, showed typical variation in cortisol levels. Then, the researchers employed the use of brain imaging in order to examine brain connectivity in the newborns prior to the external environment’s beginning to shape brain development and measured the infants’ anxious, as well as depressive-like, behaviors at the age of two.

Dr. Buss noted that higher maternal cortisol was associated with alterations in the functional brain connectivity of the newborns, affecting the way different brain regions can communicate with each other. This altered connectivity involved the amygdala, which is a region of the brain that plays an important role in the processing of emotions. This brain connectivity pattern predicts anxious, as well as depressive-like, symptoms two years in the future.

Depression and Its Effects on the Newborn 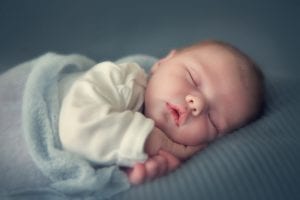 Researchers at the King’s College London discovered that children born to mothers who had a major depressive disorder while pregnant showed altered behavior, as well as biological stress response, when compared with children born to healthy mothers.

Sarah Osbourne, a senior research associate, noted that the importance of research on the topic is two-fold: it’s important to understand the consequences for the mother and her child. Keeping in mind that depression is not uncommon and 10 percent of women are depressed when pregnant. Secondly, this form of research informs on the possible mechanism of development programming.

Measured on the Neonatal Behavioral Assessment Scale on day six, infants born to mothers who had major depression when they were pregnant showed an increased cortisol response to stress at the age of one, compared to infants born to healthy women.

Dr. Osbourne noted that the study provides preliminary evidence when it comes to important negative consequences of depression on the mother’s and the child’s stress-related biology, in addition to the neonatal neurobehavior. She added that, while the study requires replication in a larger sample, it will highlight the importance of active screening for depression while pregnant and it will inform decisions about risks and benefits when it comes to deciding upon the treatment of depression for pregnant women.

Everyday You
Previous Post: « How Your Sleep Changes During Pregnancy
Next Post: How Endometriosis Impacts Pregnancy and Delivery »