The keto diet is all the rage these days, but many women wonder if it is a good idea to adopt this high-fat, high-protein option while pregnant. It is important to do your research of on a ketogenic diet while carrying a child before making your decision.

What is the Keto Diet?

A ketogenic diet is the latest trend for weight loss, with many also touting the health benefits. On a ketogenic diet, the body uses fat as an energy source instead of carbohydrates, since high content carbs aren’t allowed on the ketogenic plan.

Ketosis, the metabolic state that is often achieved by the ketogenic diet, is considered healthy by some advocates. However, other researchers believe it’s a bad idea to stay in ketosis for too long and doctors may panic if a pregnant woman’s urine shows signs of ketones.

A ketogenic diet helps with weight loss and has also been credited in assisting with recovery from certain medical conditions. Those who suffer from epilepsy sometimes see a reduction in seizures when on a ketogenic diet. The chances of developing diabetes, Alzheimer’s and certain types of cancer may also decrease when a ketogenic diet is followed, and these benefits are enough for some to say goodbye to high-carb foods and adopt the keto approach.

There are benefits to a ketogenic diet for pregnant women. Processed snack foods pretty much disappear when a person truly adheres to this diet, and that’s good for mom and the baby. Being on the ketogenic diet also makes mom conscious of what she is putting in her body. She’s more likely to stick to whole foods and to choose quality instead of just filler foods. Since excessive weight gain during pregnancy can set a child up for problems with obesity in the future, a ketogenic diet focused on healthy foods may help avoid this fate. 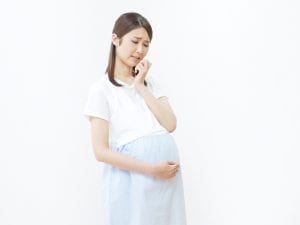 Research studies on pregnant women that could put the baby at risk are unethical, so there aren’t any studies to pull from when looking at the consequences of a ketogenic diet during pregnancy. However, there are some overall concerns about being on a low carbohydrate diet during this time of growth and change in the body for both mom and baby.

People often lose weight on the keto diet, and while that’s a win most of the time, pregnant women don’t need to lose weight while pregnant. In fact, they are supposed to add 300 calories to their diets, and this is hard to do if sticking to strictly keto. Not gaining enough weight can put the baby at risk for developmental and low birth weight issues.

Certain fruits and vegetables are even forbidden or limited on the ketogenic diet, and that means mom and the baby will miss out on certain nutrients and vitamins found in these foods.

Going into ketosis while on this diet can leave a person exhausted and this means a woman who is also likely struggling from pregnancy tiredness is going to feel even worse. She may cut out physical activity that would be good for her and the baby to try to conserve her strength. Regular physical activity can shorten labor, keep mom healthy, and is recommended during pregnancy.

There was a research study on mice that showed a negative impact. Baby mice whose mothers were on a low-carb diet while pregnant had developed smaller brains. They also experienced neurobehavioral changes that were blamed on the ketogenic diet. Again, since these tests have not been replicated in humans, there’s no way to know for sure if the effect would be the same.

How Should a Woman Decide?

It’s easy to find doctors and researchers on both sides of this issue. Each woman is unique and her individual needs have to be considered. It’s important to discuss going on any special diet with a doctor before doing it, especially if pregnant. For those who do want to give the ketogenic diet a try, it’s recommended to talk to the doctor and begin before getting pregnant.

Prenatal Health
Previous Post: « 10 New Year’s Resolutions You’ll Want to Keep If You Are Pregnant
Next Post: The Importance of Folic Acid While Breastfeeding »