Consuming a low-carb diet can produce both beneficial and detrimental results for the health of pregnant women and their unborn children.

The following short piece will discuss this dieting phenomenon—how employing such a dietary plan could potentially affect expecting women and their newborns, and examining what effects following this nutritional guide might have on other medical conditions such as diabetes and polycystic ovarian syndrome (PCOS).

Adherents to this dietary practice limit their intake of foods containing plentiful amounts of carbohydrates. Carbohydrates are scientifically classified as macronutrients and are comprised of sugar, starches and fiber. The body utilizes these chemicals to create the energy it needs to properly function.

Carbohydrates are found in foods containing significant quantities of sugar, grain products and pasta. Those consuming fewer carbohydrates will typically eat foods such as vegetables, as well products rife with larger concentrations of natural fats and proteins.

Obedience to a nutritional protocol that limits a woman’s sugar intake might be beneficial for expecting mothers who are stricken with type II diabetes, who have a family history of that illness or who possess an increased risk of developing gestational diabetes, of which onset is usually during pregnancy. Gestational diabetes can pose significant health risks to a mother and her unborn child and could increase her risk of becoming afflicted with chronic, type II diabetes after giving birth.

That said, there are others in the medical community who opine that most women should not restrict their intake of carbohydrates during pregnancy. 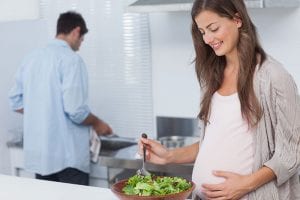 Moreover, other medical professionals opine that a diminished intake of carbohydrates during pregnancy can put unborn children at risk of developing certain types of birth defects. A recent scientific study conducted showed that the observance of a low-carb diet by expecting women could increase their newborns chances of being afflicted with congenital conditions known as Neural Tube Defects (NTDs) by as much as 30 percent.

NTDs typically result in a baby developing central nervous system (brain and spinal column) deformities. Most of these particular maladies precipitate significant physical and cognitive development problems. Certain manifestations can eventually be fatal and, in some cases, may lead to miscarriages, stillbirths and death shortly after the child is born.

The aforementioned study was organized by a team of scientists representing University of North Carolina at Chapel Hill. These researchers studied data collected from more than 11,000 women from across the United States. The findings showed that roughly 1,750 test subjects gave birth to children stricken with some manifestation of an NTD. In addition, the vast majority of these women observed a diet low in carbohydrates and received an intake of folic acid determined to be half of what the other examinees consumed.

The Impact of Consuming Fewer Carbohydrates on Other Medical Conditions

Though the results may be quite mixed for pregnant women, those with certain other medical issues may benefit from adopting the dietary practice. One notable case is that of PCOS, which occurs when a woman produces increased levels of hormones called androgens. The increased blood concentrations of these chemicals might precipitate symptoms like irregular menstrual cycles and leave women at an increased risk of developing infertility, as well as illnesses such as high blood pressure and diabetes.

Scientific studies performed have concluded that some women with PCOS have experienced a decline of their conditions after adopting a diet with carbohydrate restrictions, thus if a pregnant woman has PCOS and has adopted a low-carb diet in the past, it is advised to understand any dietary adjustments needed during pregnancy to ensure enough carbohydrates are being consumed.

Prenatal Health
Previous Post: « Baby’s First Cold; What to Expect
Next Post: PCOS and Pregnancy, What You Need to Know?  »