Pregnancy and motherhood come with a lot of changes, both physical and mental. Not only are there a myriad of physical changes that you begin to notice, from bloating and swelling to back pain and nausea, you may also start to find yourself succumbing to mood swings and forgetfulness more often than you prefer.

So, if you find yourself leaving your car keys in the refrigerator, or singing your way through your morning routine and then swabbing away tears from your cheeks by lunch time, fear not, chances are you are merely experiencing another aspect of pregnancy. The fact is, pregnancy has a weird way of turning our emotions and trains of thought against us, and with these new experiences, we welcome you to the world of pregnancy brain changes!

“Pregnancy Brain” and the Changes in the Brain

There’s no doubt that during pregnancy, the body undergoes a number of chemical and hormonal changes. These biological changes aid in baby development and preparing your body to support and grow a fetus.

Pregnancy brain is a term often used to describe the changes in a soon-to-be mother’s brain that may cause her to experience memory lapses, forgetfulness and overall brain fog. It is a common condition that affects millions of pregnant women across the globe, in fact, Scientific American reports that about 80 percent of new mothers experience a decline in cognitive activity during this time in their lives.

While the data is still somewhat inconclusive surrounding the neurological changes within a woman’s biology, scientists believe pregnancy brain is related to gray matter in their temporal lobe. Gray matter, in a general sense, regulates our nerve function, processes new information, helps us make logical decisions and controls our emotional outbursts.

Until recently, researchers across the world have been left to speculate the exact changes that occur inside a pregnant woman’s brain, and while there have only been a few dozen studies that explore pregnancy’s impact on women’s brains. These studies involving before, during and after pregnancy brain mapping indicate that, along with hormone fluctuations, areas of the brain’s gray matter (the tissue containing the cell bodies and synapses of nerve cells) actually shrink, and even stay reduced for up to two years postpartum.

While the idea of your brain shrinking may seem scary and detrimental, the fact is this change can represent a fine-tuning of certain connections, making for more efficient brain circuits in areas that are more essential for new conditions, such as parenthood.

These studies have shown that the areas of gray matter that shrink during pregnancy tend to influence spatial memory, which accounts for memory lapses, and are assumed to suffer from time to time during pregnancy and postpartum as they are not as critical for offspring survival during that time. This shrinking of gray matter, in combination with surges of hormone levels, such as estrogen and oxytocin which are related to the sensitivity of the surrounding environment, has the ability to enhance areas of social cognition, or the ability to figure out what others are thinking and feeling. Postpartum, when women in the study were shown images of their baby, this area of the brain showed the most activity, showing an enhanced social cognition ability to further help the mother understand the child’s needs. Liisa Galea, a neuroscientist at the University of British Columbia explains that as a result of the shrinking grey matter, the body appears to be able to redirect energy and resources that are essential for determining baby’s needs and care for the baby.

Studies have also shown that soon after giving birth, women’s brains show additional changes such as an increase in volume in the hypothalamus, amygdala and striatum, areas that are essential for regulating emotions and driving one’s protective nature. Dr. Felice Petraglia reported that the increase in the volume of the hypothalamus is due to hormones rising during pregnancy to create and grow the placenta.

Among the side effects associated with these neurological changes during pregnancy, emotional instability and forgetfulness can, at times, reign as king. Not understanding that these are biological responses and changes, can cause these mental lapses or breakdowns to stack up and cause women’s emotions to fluctuate even more with the frustration of the situation.

While every pregnancy experience is unique, and not every soon-to-be mother will experience the same level of “pregnancy brain” as another, here are some of the most common side effects women face during and after pregnancy: 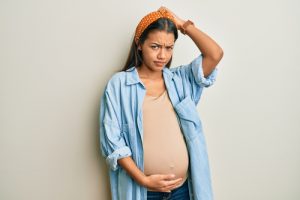 If you are scanning through this list and beginning to feel bad, rest assured, it’s okay. “Pregnancy brain,” like weight gain, fatigue and morning nausea, is a common side effect and can clear up after time.

Rather than being critical of memory lapses or mood swings, accept it for what it is and make a game plan to find a healthy approach to addressing your emotions the next time they begin to reel out of control.

Steps to Help You Manage it

Managing the side effects of “pregnancy brain” can be challenging, but it is doable when you understand what is taking place on a biological level. When symptoms begin to present themselves, plan your response according to your experience.

If you find yourself forgetting names, phone numbers and work-related tasks more frequently, create a new habit of jotting down information on a piece of paper or inside of a note application on your phone. Similarly, if you find that you can no longer keep track of your keys, phone or purse, try to create one location to place them in your house so you don’t have to trek around the house looking for them each day. While this may seem silly at first, creating new habits that compliment your symptoms can help avoid frustration in the future.

Take care of yourself

Throughout your pregnancy and postpartum, be sure you are taking appropriate steps to help keep your mental and physical health in top shape to avoid or at least lessen side effects. Ensure you are getting enough quality sleep, proper nutrition, and regular physical activity, as a lack of sleep, nutrients or exercise can all play a major role on energy levels, memory and the ability to focus.

Reach Out for Help

There is no shame in asking for help, especially when you’re pregnant. When possible, enlist the help of those around you to help you keep track of things or remember to do something.

Have a Sense of Humor

At the end of the day, try not to be too hard on yourself. Stress and frustration will only cloud your pregnancy brain more, so let yourself have a good laugh about this stage of pregnancy, and encourage your partner to do the same. Laugh at the fact you put your cellphone in the pantry or wore mismatching shoes to work and enjoy what you can from your pregnancy.

Being pregnant is, without a doubt, one of the most challenging experiences a woman can go through. Keeping this in mind, realize that your body is going through a plethora of changes that will affect you both physically and mentally, and making a mistake is bound to happen. Understand the changes responsible for it, forgive yourself, and accept that things will be okay.

When you learn to let go and forgive yourself for your behavior, you’re more inclined to make positive decisions in the future in response to “pregnancy brain,” and when things get tough, use the tools and strategies available to you to minimize the side effects.

Everyday You
Previous Post: « A Complete Guide to Contraction and Delivery Pain Relief Methods
Next Post: Maintaining Mobility in the Third Trimester »