During the first week of your baby’s life there are a few health precautions and procedures that you should be aware of. If you have the time to sit down and prepare for what is to come before the birth of your child, you can feel confident in the route you wish to take.

Newborn Screening is a preventive method that helps to reduce infant mortality. The purpose for the screening is to help new parents to detect possible unidentified defects within the baby.

Originally Newborn Screening was a simple blood or urine test, but now it is a much more comprehensive and complex system. It is capable of detecting over 50 different possible conditions. This procedure is designed to detect abnormalities and to hopefully address serious medical conditions during their initial stages. The ideal time period to do this screening is within the first 48 hours of birth.

It is important to note that each state has a different standards when it comes to what these tests include within the United States. While it is up to the parents if they wish to do this testing or not, it is important to keep in mind that it can help to avoid possible health disorders in your child’s life if they are found and treated early.

Why the Growing Need? 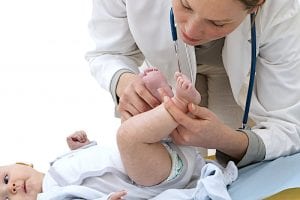 In India infant mortality is a serious concern. In 2016, UNICEF released a report stating that 6 lakh children die within the first month of birth in India. By adopting this Newborn Screening into common practice, these numbers have shrunk over the past few years.

Screen newborns for The Indian Medical Association (IMA) has found that one out of every 20 newborn children are admitted with genetic disorders to the hospital. It has been found that every 64th newborn in thousands potentially inherits a genetic disease that could be transferred to future generations.

If the test is performed within the first 72 hours of the newborn’s life then it is easier to identify the causes and detect the possible high risk of developing disorders, such as permanent neurological disorders and physical damage among infants. Some of which disorders, with swift and timely medical intervention can be treated.

It is possible for baby’s to go blind from an eye infection after birth if they come into contact with certain bacterias or STD’s. The eye ointment is merely a precaution to help avoid damage, as damage to the cornea can occur quickly during this time period.

As the parents you are also able to decline the ointment all together, but doctors recommend to take the precaution and protect your newborn from possible infection.

The Vitamin K shot, is quite simply put an easy way to help avoid a very serious disease. Babies are born with very low stores of Vitamin K. Vitamin K deficiency (VKDB) occurs when babies cannot stop bleeding and could bleed out or have major blood loss because they are unable to form a blood clot. To help avoid and prevent this a Vitamin K shot is recommended a few hours after birth.

Other than the Vitamin K shot, there is no sufficient way for a baby to get Vitamin K. It is not a vitamin that they can get from breastmilk and it takes their body about four- six months to have enough of the vitamin within their system. This only comes once the baby has begun to eat regular foods that contain Vitamin K.

A baby that does not receive the Vitamin K shot is at risk of spontaneously bleeding into his or her brain or intestines, which could result in brain damage or even death.

The CDC has rendered the Vitamin K shot as safe for newborns. Out of 330,000 infants that are cared for annually at BORN (Better Outcomes through Research for Newborns) only 0.6% of parents refused the Vitamin K shot. While this rate may sound low, this means that 638 infants did not receive this possibly lifesaving shot.

The study went on to show that the failure to receive vitamin K after birth increased the risk of vitamin K dependent bleeding. It was found that late VKDB, which occurs between one week and six months of age, was 81 times greater to occur among infants that did not receive the intramuscular shot.

This shot is also strongly recommended if you are having a boy and plan on doing a circumcision. Circumcision requires a surgical procedure that you will want to make sure that your child can properly heal and clot from. A Vitamin K shot can help to decrease the risk of bleeding from this procedure.

The Hepatitis B Vaccine

Another vaccine that is recommended within the first week of your newborn’s life is Hepatitis B. There is no cure for the Hepatitis B infection. So the only way for doctors to help prevent it is the vaccination itself Hepatitis B is a potentially serious condition and is an infection of the liver.

The American Academy of Pediatrics (AAP) recommends that newborns get their first vaccine during their first day of life. It has been deemed a very safe vaccine for newborns.

If a newborn comes into contact with Hep B there is a significant chance that the infection will be chronic and persist for ra long time. If the infection is not treated, it is possible that the infant could die from complications.

The Importance Behind the Vaccine 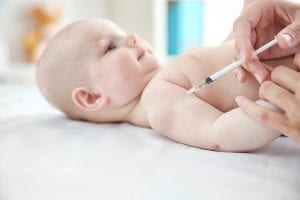 If the doctor gives the Hep B vaccine within 24 hours of the baby’s delivery it is 75 to 95 percent effective in preventing the passage of Hep B from birth mother to baby. If the infant continues to receive the medication and follow up vaccines, the AAP estimates that the infection rate drops between 0.7 and 1.1 percent.

The long term risks of not getting the vaccine include liver cancer and cirrhosis of the liver. Hep B primarily attacks the liver, thus causing inflammation that can damage the organ over time. An acute infection can last for less than six months and may not even cause any symptoms. However, chronic infections increase a person’s risk of damage to the liver over time. According to the Immunization Action Coalition, around 3,000 Americans die every year from liver cancer or liver failure as a result of Hepatitis B.

While the first week of your new baby’s life can feel a bit overwhelming, it is important to discuss and research how you feel about the health precautions and procedures that should be taken during this time. Ultimately, the decision is up to you and your partner on what procedures and precautions you wish to take. It is vital to take the time to research and prepare for these types of decisions before the birth of your child. This way you can help to provide the best medical care possible to your newborn.