Acetaminophen is the most popular drug in America to ease pain from headaches, muscle aches and arthritis.

A new study published in the American Journal of Obstetrics & Gynecology indicates that it may not be safe for pregnant women because the use of the drug during pregnancy has been linked with an increased risk for behavioral problems in children later on.

Although acetaminophen is generally considered safe for most adults and even babies, this study found a link between the drug and autism and ADHD in children. According to American College of Obstetricians and Gynecologists: Patients should be counseled about the risk to their babies if exposed in utero. No one believes that it is safe to take acetaminophen during pregnancy.

Effects of Acetaminophen on Pregnant Women

A study from the University of Aarhus in Denmark showed that kids exposed to acetaminophen while in their mother’s womb have a higher risk for autism. The researchers followed more than 64,000 pregnancies and found that children whose mothers had taken acetaminophen during the first trimester had a 59% increased risk for autism spectrum disorders. Kids whose mothers took it during the third trimester had a 38% increased risk. 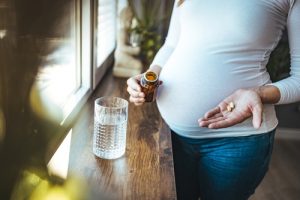 Another study, also from Denmark, shows that children whose mothers took acetaminophen during the first trimester had higher rates of ADHD at age seven. The researchers followed more than 64,000 pregnancies and found that kids whose mothers took acetaminophen in the first trimester had a 22% higher risk of ADHD and a 34% higher risk for other problems like hyperactivity, conduct disorders and anxiety.

A study from the University of California analyzed several studies and found that women who took acetaminophen during pregnancy were more likely to give birth to children with anxiety. The researchers looked at studies published between 1978 and 2006 that involved more than 1,500 infants and found a 43% increased risk for developing anxiety. That’s compared with a 7% increased risk in the general population. The researchers found that high doses of acetaminophen use during pregnancy may also be connected with postpartum depression in pregnant women.

4. ADHD and Autism Risk in Boys

Finally, other studies show boys are at a much higher risk for these problems when their mothers take acetaminophen during pregnancy. One study from UCLA showed that boys whose mothers took acetaminophen in the first trimester had twice the risk for ADHD and autism.

The researchers point out that the results are especially concerning when children are exposed to it after birth because no one knows how much of the medicine babies get from breast milk and other sources. But most women don’t think it’s safe to take acetaminophen during pregnancy, and they would never think of taking it even if they know they’re pregnant because they know how harmful it can be.

Yet, despite the potential risks, many women continue to take the drug in small doses. The drug is widely prescribed for headaches and pain, especially for people who suffer from headaches during menstruation.
So if you’re pregnant or planning to become pregnant, and undergoing treatment or continuous medications, consult your doctor on the safety of using it during pregnancy.