The American Academy of Pediatrics recommends exclusive breastfeeding for the first six months with continued nursing through 12 months and beyond. While the topic of breastfeeding solicits a number of reactions, especially when it comes to the breastfeeding vs bottle debate, one thing is certain; breastfeeding provides the child significant health benefits. But, did you know it also boosts their performance at later on in life when they are in school?

Studies have begun to show that breastfed children have better language development, intelligence quotients, and higher levels of educational attainment than non-breastfed children. While the benefits extend to all kids, they are even more pronounced in disadvantaged populations such as those who are socioeconomically disadvantaged or live in rural areas.

Cognitive development is an important aspect of babyhood that leads to later academic and career success. Experts are largely in agreement that breastfeeding provides the optimal nourishment for babies, but there has been relatively little research focused on its effects on cognitive development. A recent study sought to investigate the long-term impacts of nursing on cognition, focusing specifically on working memory in adulthood. The results were very encouraging for mothers with children as young as one year old: breastfed kids not only outperformed non-breastfed kids at a cognitive measure up to two years old, but they were also significantly better at verbal reasoning tasks up to age five.

Parents often worry about the importance of high-quality brain development because of the emphasis in Western society on academic success. Childhood is a crucial time for physical and cognitive growth, so exploring strategies to optimize this period is important. Nursing is associated with a reduced risk of maternal depression and anxiety and a reduced risk of overweight in childhood. It’s, therefore, no surprise that nursing promotes cognitive development.

What Are the Cognitive Benefits of Nursing? 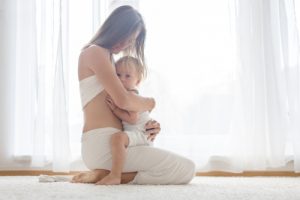 Research shows that babies who are breastfed for longer do better in school than babies who were bottle-fed. These studies show that when children are breastfed, cognitive development is superior, and the baby even develops greater familiarity with its own name. For some parents, this may seem like a daunting convolution.

Breast milk has been proven to have lower levels of antibacterial substances and more antioxidants than a formula, making it more effective for infants’ nervous systems. The longer a baby breastfeeds, the lower their risk of developing food allergies. The antibodies in breast milk increase when babies are exposed to colds or viruses in their environment. The longer a baby is breastfed, the greater the effect on the disease can be.

While all this research is intriguing, it is important to remember that breastfeeding is not always an option for all mothers and there is no risk from formula feeding, no risk of formula poisoning or increased risk of illness from not breastfeeding a baby.

Every parent wants their child to reach their full potential. And while many factors go into enhancing a child’s ability to succeed, it turns out one of the most effective things you can do is breastfeed your baby.

That’s right, according to research by Durham University in England milk production and nursing can help boost children’s intelligence while still in the womb and when they start school. This is because breast milk contains proteins that have been shown to have a protective effect on cognitive development and reduce childhood mortality rates by 50 percent. The study showed that this effect increases IQ by up to four IQ points for every year of nursing. In addition, breastfed children are less likely to die or be left disabled as teenagers.

Researchers concluded that nursing might have a protective effect on cognitive development and childhood mortality by up to four IQ points for every year of nursing.

In addition, longer nursing periods are linked to better verbal and spatial skills in kids, even after considering socioeconomic considerations and parental cognitive capacity. It is not known, though, if there is a causal link between nursing and cognitive development. The likelihood and length of nursing are higher among women from more privileged families. Additionally, mother intelligence is a powerful predictor of infant intellect, and higher maternal intelligence is frequently linked to longer nursing periods .

The availability of nutrients essential for brain development, such as polyunsaturated fatty acids (PUFAs) and micronutrients, through nursing, is one of the possible methods by which nursing might benefit cognitive development (including iron, folate and folic acid, zinc, and choline). Furthermore, nursing provides long-term protection against infectious infections and other conditions that might harm a child’s early development.

Mothers who breastfeed their children not only get the satisfaction of having given an irreplaceable gift that no other act in life can match, but they also receive a lot of benefits themselves. Nursing is at the center of global public health campaigns, with good reason: nursing does more than just give babies food for their bellies; nursing nourishes babies’ brains for life.

Postpartum Basics
Previous Post: « The Best Antioxidants to Include in Your Pregnancy Diet
Next Post: Postpartum Constipation: What to Know »