Sunlight can greatly benefit the health of a newborn baby, and in this article we will address specific health attributes sun exposure may have on infant children, as well as certain safety methods parents can employ to ensure their child’s sunbathing activities are conducted as safely as possible.

The sun is believed to provide numerous positive physical and biological benefits to newborns, including:

Medical professionals opine that the vitamin D contained in the sun’s light increases a baby’s bodily concentrations of three vital hormones: insulin, serotonin and melatonin. The sun’s rays are thought to enhance a baby’s ability to produce insulin. This chemical is vital to growth and metabolism. Sunshine, when combined with a proper diet and exercise, is also believed to help prevent the development of diabetes, a potentially serious medical disorder, in childhood and adulthood.

Serotonin is crucial to a baby’s brain chemistry. Newborns with normal levels of this substance are less likely to experience behavioral problems like anger, mental maladies such as depression, or developmental disabilities as they age.

Melatonin is important to regulating an infant’s sleeping patterns. Increased energy could be among the byproducts of a baby receiving adequate amounts of rest.

Vitamin D possesses the natural ability to foster more efficient clotting capabilities in a newborn’s bloodstream. Vitamin D contributes to lower blood pressure. Such circumstances enable the blood to clot properly. Blood clotting is imperative in the prevention of internal bleeding that might be caused by a variety of illnesses or some kind of acute, physical injury.

Vitamin D plays a crucial part in the development of a newborn’s nervous system. A strong nervous system could render a baby better equipped to cope with pain and enjoy less tension and anxiety later in life.

Vitamin D enhances the body’s ability to metabolize calcium. This nutritional element is paramount to the growth of a newborn’s bones and the development of his or her teeth.

Vitamin D contributes to the strengthening of the immune system. A more powerful immune system may help newborns establish a greater resistance against the development of various minor and more serious ailments. 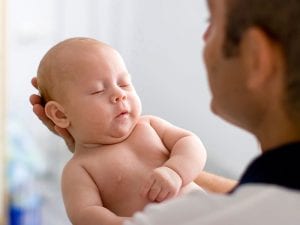 As beneficial as sunshine may be for newborns, it is also important to realize that the sun’s rays are powerful and could be potentially harmful to a baby if parents do not observe certain safety precautions. With that said, issues such as sunburn can be avoided by these strategies:

The skin of infants who are less than six months of age lack enough skin pigmentation called melanin to overcome the damage exhibited by the sun’s rays.

Once a newborn reaches six months old, they can safely sunbathe. Parents are advised to apply sunscreen to any portion of the baby’s skin that is not covered by clothing, such as his or her hands, and facial areas not guarded by a hat or visor. The sunscreen should be waterproof and have a sun protection factor greater than 20.To be effective, sunscreen must be applied at least a half-hour prior to sun exposure and may need to be reapplied depending upon how long the newborn’s sunbathing period is expected to last, as well as if the child sweats excessively during this time.

Do Not Leave A Newborn Unsupervised

Supervision is critical at all times. Do not leave your baby unattended. He or she could remove protective clothing or shift into a position that places him or her more directly towards the sunlight.

Skin damage precipitated by sunshine is most common during the times between 10am and 3pm. It is during this timeframe that the sun’s rays are most powerful. Basically, however, to protect the baby, it is recommended, that it should only be in the shade in the first year of life. Also in this place, a child can benefit from the sun and form vitamin D. But keep in mind: do not forget protective clothing and sunscreen!