Multiple sclerosis can impact pregnancy. Multiple Sclerosis might impact the health of the expecting women and may present special considerations during the childbirth process. It is important to understand the precautions afflicted individuals can take to better ensure the well-being of their unborn children.

Multiple sclerosis, MS, is a progressive, chronic autoimmune disease that impacts the neurological system. Once the disorder commences, the immune system attacks and damages myelin sheaths, which are the protective coverings for nerve cells and fibers in the brain, spinal column, and other regions along the central nervous system.

Progressive damage to these structures may ultimately precipitate scarring that inhibits the electrical impulses the brain uses to communicate with other bodily areas.

Nerve damages associated with MS can vary from individual to individual, and physical manifestations will often be related to the specific region of the nervous system in which the illness is occurring. Those stricken with the malady might experience symptoms including balance problems, stiffness or rigidity in the arms or legs, vision disturbances, mobility challenges, intolerance to warm temperatures, dizziness, tiredness, sexual dysfunction, bowel or bladder issues, cognitive disruptions (memory loss and concentration challenges), pain, and depression.

In earlier years, women afflicted with multiple sclerosis were advised to refrain from becoming pregnant because medical professionals feared the bodily stress of pregnancy had the potential to exacerbate associated physical manifestations or harm the unborn child.

However, in more recent times, such opinions have become less prevalent. In fact, numerous research studies have been conducted and seem to have concluded that the presence of MS has no significant impact upon fertility levels, nor does it increase a child’s chances of developing complications such as birth defects. The only possible issue researchers have concluded is the potential for babies to be born with slightly lower birth weights than those born to mothers not stricken with MS. 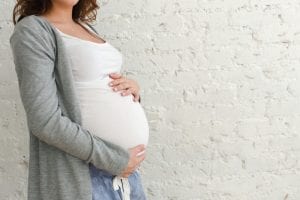 Though MS does not typically precipitate any serious issues for expecting women, bodily changes could, to some extent, exacerbate existing symptoms. This could be particularly true later in the pregnancy when both the fetus and the mother grow.

This excessive weight could elicit greater walking difficulties or mobility issue in stricken individuals. As a result, maneuvering around could require greater energy expenditures, which could potentially result in increased incidents of fatigue. Additionally, those subjects dealing with bowel or bladder issues (which are quite common in expecting women to begin with) might see said issues increase.

In many instances, women afflicted with MS do not experience any added challenges during childbirth. However, in more progressive cases of the disease or in instances where muscles in the pelvic region might be impacted, birthing might take longer or necessitate delivery employing a medical procedure known as a Caesarean section (C-section), in which a surgeon makes an incision in the abdominal and pelvic regions that enables the baby to pass through.

Precautions Women With MS Can Employ While Expecting

Despite the fact that most cases of MS do not precipitate complicated pregnancies, impacted women are still advised to consult with their doctors regularly and report any new or worsening physical manifestations. Additionally, those whose abdominal or pelvic muscles are stricken might wish to orchestrate childbirth in a medical facility especially equipped to complete deliveries involving women with MS. Individuals who experience walking or mobility issues might be aided by the use of canes or other walking devices.