What is Meant by Placenta Accreta?

The cause of this abnormal attachment is unknown. In severe cases, the chorionic villi can penetrate all the layers of the uterus to attach to nearby organs such as the bladder and the intestines.

While there are no set causes of placenta accreta, this condition is often times associated with women who have undergone a previous Caesarian section as they often occur where a scar from a surgery occurs, like removing a fibroid or having a c-section. In addition, factors that may increase risk include smoking, advanced age pregnancies, the incidence in the U.S. has increased from 1 in 30,000 deliveries in 1950 to 1 in 731 deliveries in 2011, attributed to an overall increase in the number of C-section deliveries. The risk of developing the condition increases with the number of previous C-section deliveries. The incidence is also increased in women who have experienced in vitro fertilization, ectopic pregnancy, dilation and curettage, and history of uterine surgery. Additionally, risk is increased in women over age 35 years. 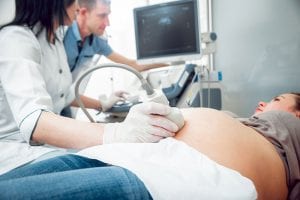 This condition is typically asymptomatic and is discovered during routine prenatal ultrasounds. Luckily, this condition does not cause bleeding, pain, or harm to the fetus during the pregnancy, however, when not detected prenatally, profuse and life-threatening bleeding can occur when the placenta is manually detached from the uterus after delivery. As a result, pregnant women who are diagnosed with this condition prior to delivery are scheduled for elective caesarian deliveries. This allows for partial or complete hysterectomy, surgical removal of the uterus, if bleeding cannot be controlled. A complete hysterectomy is highly effective in treating or for minimizing hemorrhage, but is not always necessary. In general, large accretas can be managed with a hysterectomy while small or “focal” accretas can sometimes be removed without a hysterectomy.

Women who have had previous caesarian deliveries receive ultrasounds to specifically screen for abnormal placental uterine attachment, but in women with no risk factors it is commonly an incidental finding. The diagnosis is usually made during the first trimester. Transvaginal or transabdominal ultrasounds, MRI, and Color Doppler studies can most often times detect abnormal attachment of chorionic villi.

Pregnant women diagnosed with the condition are given medical precautions to protect the mother and baby. Sexual intercourse, pelvic examination, and intense physical activity are often times recommended to be avoided to prevent risk of placental detachment. If vaginal bleeding occurs, bed rest is recommended in the third trimester. In addition, Rhogam, or anti-D immune globulin, can be administered in if the mother is RH negative. Corticosteroids are given to reduce the risk of premature birth if vaginal bleeding is detected between 23 and 34 weeks of gestation.

Closer to delivery, an ultrasound is usually performed to detect whether the bladder has been invaded. The medical team has an in-depth discussion with the patient regarding the risks of the condition and obtain consent for possible removal of part or all of the bladder, uterus, or intestines to control bleeding should it be required after delivery.

Plan on An Early Delivery

Women with placenta accreta typically will not carry full term. A caesarean delivery is typically scheduled between 34 and 36 weeks of gestation, and no later than week 37 of gestation.

During and after delivery, it is not uncommon for patients with placenta accrete to require a blood transfusion during or after delivery due to massive bleeding. Women with this condition are at high risk for bleeding and hemorrhage during delivery, which is why expert care is needed. However, like all health concerns and complications, this condition can occur in a wide range of circumstances and not every woman will hemorrhage.

Prenatal Health
Previous Post: « Umbilical Cord Milking; a Benefit for Preterm Babies
Next Post: How to Stay Healthy When Traveling Pregnant: The Need-To-Knows »