Celiac disease is one of the most common autoimmune conditions. If you are pregnant and have been diagnosed with celiac disease there are certain risks and preventative measures that you will want to be aware of to help better your health and the health of your baby. Having celiac disease doesn’t have to be a burden during pregnancy.

Women who suffer from celiac disease are at a higher risk for pregnancy problems and complications two to four times the rate of women who do not have the condition. Following a gluten free diet during pregnancy can help lower your risk for some of these problems.

Celiac disease can cause folic acid, selenium, and zinc deficiency, which are all important nutrients for pregnancy.

According to an Italian study of reproductive life, 65 percent of celiacs reported at least one gestational disorder, compared to the 31 percent of women without celiac in the study.

The common complications that were found are:

The study found that 85 percent of these women were not diagnosed with celiac disease before their pregnancies and that following a gluten-free diet might have helped them to avert these pregnancy complications.

Another possible concern is that women with celiac disease have been found to have shorter pregnancies and lower birth weight babies on average.

Your Diet while Pregnant

When pregnant with celiac disease maintaining a gluten free diet will help you to avoid a lot of complications. It may seem difficult to get all of the nutrition that you need while on this diet, but here are a few particular nutrients to focus on: 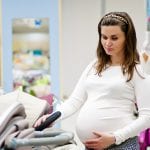 From cribs and strollers to baby monitors and carriers, a new baby requires an extensive list of must-have items before their arrival. For those looking for some guided help, here’s a complete guide of key items and considerations to look into before you begin stocking up on all those essential baby items.