Anyone who is pregnant has likely heard many different explanations or tips from others who have also gone through the process. These recommendations are typically focused on either inducing one’s labor or shortening the process overall. However, these tips are usually the results of wives’ tales—or are they?

Dates, this mysterious fruit, seem to have many people confused about whether they actually affect anything, so it’s time to set the record straight.

The most common rumor when talking about how dates can affect giving birth is that they function as a perfectly natural way of inducing labor. Because a lot of the evidence regarding this is mainly firsthand experience from people who have gone through the process, it’s worth taking a look at scientific evidence.

Believe it or not, there’s a significant amount of scientific evidence to suggest that dates do have an effect on someone’s labor process. For example, all three of these studies took a look at women who were eating dates a few weeks before their due dates (no pun intended) and noticed that there was a correlation between easy labors and eating dates. Not only did there appear to be a relationship between dates and labor being induced, but women who ate dates before going into labor also reported an easier experience overall compared to those who didn’t. For example, in the second of the studies, women who ate dates were 55 percent less susceptible to have labor induced via oxytocin, instead having a more natural process.

Can Dates Shorten Your Labor? 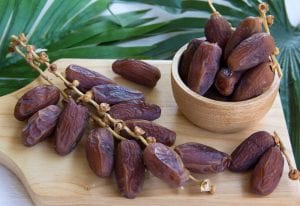 The other main theory when speaking about dates and labor is whether they can shorten your labor overall. This theory is based on circumstantial evidence, typically by those who have craved and consumed dates within the last four weeks of their pregnancies, claiming that they ended up having much shorter labors than they usually do. Though this might seem like a completely arbitrary statistic, there might be something to it, including scientific evidence.

The most convincing data that gives evidence of this phenomenon is this study, which looked at two groups of women who were all four weeks away from giving birth. What’s the difference between these groups? One was eating at least six dates per day, and the other wasn’t. The results are quite interesting, with the women who were eating dates on a daily basis having significantly shorter labors than the other group. Specifically, the point where one group was saving more time than the other was with the stage going from 0 to 10 centimeters, which went much more quickly in women who were eating dates.

It should be noted, though, that even the researchers did not consider this significant evidence of anything. It was clear that dates favorably changed the way in which women go through labor, but there need to be more studies on this specific hypothesis to make an objective point. However, out of this study, it’s easy to see that dates do have an effect that can lead to a shorter labor, so they are surely worth looking into if you’re looking to subdue some of the effects of giving birth.