Hot flashes can occur during pregnancy and are usually a sign of a complication. Medical studies have revealed that women who develop hypertensive conditions or gestational diabetes during pregnancy have a higher incidence of hot flashes during menopause.

Pregnancy Complications That Can Lead to More Hot Flashes in Menopause

Two complications of pregnancy that are believed to increase the frequency and severity of hot flash sensations during menopause are preeclampsia (a hypertensive disorder) and gestational diabetes. Both conditions derive from a common source: vascular endothelial dysfunction.

Approximately 5 percent of pregnant women develop preeclampsia. It is characterized by a sudden temperature spike accompanied by swelling, predominantly in the hands, feet and face.

If not properly diagnosed and treated, preeclampsia can lead to full-blown eclampsia, a potentially life-threatening pregnancy complication.

Usually discovered during a routine prenatal exam, preeclampsia is often asymptomatic in the early stages. The spike in blood pressure is not noticeable and could be a normal part of the pregnancy. The unique change that alerts the doctor to the presence of preeclampsia is a high blood protein level.

Preeclampsia in late pregnancy may require a cesarean delivery or labor induction. Steps can be taken to control the condition, but it cannot be completely resolved until the baby is delivered.

Research shows that women with gestational diabetes who achieve ideal body weight post-pregnancy have a less than 1-in-4 (25 percent) chance of developing type 2 diabetes. 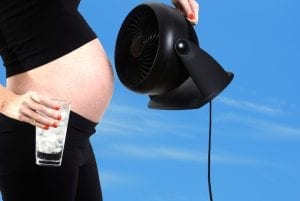 Study results presented in San Diego at the 2018 North American Menopause Society (NAMS) Annual Meeting revealed results of tests performed to analyze the effects of the above pregnancy disorders on symptoms women experienced later in life.

Over 2,200 women took part in the (SWAN) Study of Women’s Health Across the Nation. The study revealed a moderate increase in the frequency of hot flash symptoms in women who had experienced certain complications of pregnancy.

Dr. Rhoda Conant, who led the study at the University of Oklahoma Health Science Center, explained that women who had experienced the above-mentioned pregnancy complications were generally heavier and tended to be taking diabetes or lipid-lowering medications.

She emphasized the significance of pregnancy complications on a woman’s health later in life. Because approximately 60 to 80 percent of women are troubled by menopausal hot flash symptoms, Dr. Conant highlighted the importance of health care professionals seeking to understand the basic risk factors connected to these issues.

Dr. Laurie Gregg, an OB-GYN physician in Sacramento, California, says that hot flashes in pregnancy are normal. Routine hormone fluctuations, such as drops in estrogen levels, cause more than one-third of pregnant women to have hot flash symptoms, sometimes continuing after giving birth.

The wavering hormone levels continue for a time after birth, especially in nursing mothers. Hot flash symptoms due to hormone changes usually affect the chest, head and neck and are fleeting. Care should be taken to make sure the hot sensation is not fever due to infection.

Menopausal hot flash sensations are connected to vascular endothelial dysfunction, and evidence strongly suggests that hypertensive and diabetic complications of pregnancy carry over to increased frequency and severity of menopausal hot flash symptoms.

Pregnancy Basics
Previous Post: « Lentils During Pregnancy—A Guide to Benefits and Recipes
Next Post: The Importance of Restricting Weight Gain for a Plus-Size Pregnancy »