Many have debated whether the flu shot is safe or harmful during pregnancy. This article will focus on the benefits and possible dangers of receiving a flu shot while pregnant.

Your healthcare provider may recommend you to get a flu shot while you are pregnant. For a pregnant woman, the flu virus can be deadly. When pregnant, your body goes through many different changes, including immune suppression. This means you are more likely to get the flu or other nasty illnesses like pneumonia. Most of us know that children and elderly individuals have a higher risk of complications when they catch the flu. This is because a child’s immune system is not fully developed, and the elderly have a weaker immune system than young adults. When a pregnant woman catches the flu, she also has a higher risk of complications because the immune system is working hard to protect her and the unborn baby from illness, thus causing a weak immune system. Flu complications for a pregnant woman include, but are not limited to: 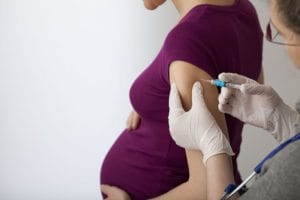 Approximately 36,000 people in the U.S die from the flu virus every year. A healthy adult can easily survive the flu virus, and may even carry the virus without having any symptoms. For newborns, the flu can be deadly. The virus can cause respiratory illnesses, difficulty breathing, dehydration, high fever and even death. Nearly all newborns have to be hospitalized if they are infected with the virus. A baby under two weeks of age has a higher risk of death as they cannot be treated with proper medication. When a pregnant woman gets a flu shot, she is not only protecting herself but her baby as well. The baby will build an immunity to the flu virus for the first few months of his/her life. This is beneficial because a baby cannot get a flu shot until they are at least six months of age.

I will start off by saying that flu shots have not been studied enough in pregnant women. There have been short-term assessments and tests that have provided insufficient data. No one can be sure if the vaccine is 100 percent safe, but there are reasons to believe why it could be harmful to your unborn child.

Many people are unaware that the flu vaccine contains thimerosal, aka mercury. What many people do know is mercury is harmful to a developing baby. Mercury can cause irreversible brain damage to a child and cause problems with their nervous system.

Have you ever heard of the Minamata Bay Disaster? This incident occurred in the 1950s and 1960s in Japan. To make a long story short, a local corporation dumped a large amount of mercury into the Minamata Bay, which was consumed by fish that were then eaten by people. Some of the women who ate the fish were pregnant. According to the FDA, babies born to those women had neurological disabilities such as deafness, blindness, mental retardation and cerebral palsy. Even today, pregnant women should avoid or eat a limited amount of fish to prevent mercury poisoning.

As of right now, the Centers for Disease Control and Prevention (CDC) recommends pregnant women get a flu shot during any trimester as it is declared safe. A recent study has shown pregnant women who received consecutive annual flu shots had an increase in miscarriage 28 days after receiving the second shot. Doctors normally recommend the flu shot in the 3rd trimester to decrease risks of complication.

If you are pregnant and your healthcare provider recommends a flu shot, it is because they believe the pros outweigh the cons. The flu can be deadly for pregnant women and children, and there have not been enough tests to determine whether the flu vaccine is safe or harmful during pregnancy.