Controlling the occurrence of systemic inflammation is imperative for women with IBD during pregnancy.
IBD can have a detrimental impact on women who are expecting or even their unborn children, but there are steps that can be taken to help curtail IBD flares and the accumulation of inflammation.

Inflammatory bowel disease, commonly abbreviated as IBD, is a term used to describe ulcerative colitis (UC) and Crohn’s disease. These two ailments are autoimmune disorders that attack portions of the digestive tract by causing inflammation in regions in the body ranging from the large intestine (colitis) to the mouth, esophagus, stomach and intestines (Crohn’s disease).

Symptoms can vary from case to case. However, each ailment comes with certain common manifestations such as abdominal pain, diarrhea, constipation, weight loss, decreased appetite and, in severe instances, bloody stools, and internal bleeding. Furthermore, though affected individuals often experience these conditions for life, physical manifestations are not witnessed every day. Rather, IBD patients experience symptomatic periods known as flares that may last anywhere from several weeks to several months.

Inflammation is the body’s natural way of defending against systemic invaders such as allergens and hostile microscopic organisms like bacteria and viruses. That said, chronic or severe inflammation can cause a host of internal injuries and illnesses or exacerbate existing conditions such as IBD. The increased stress on the body and strain faced by expecting women places them at an increased risk of feeling the adverse effects of systemic inflammation. 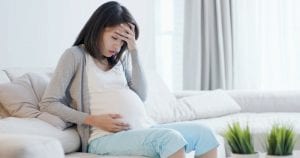 Many physicians believe women with some form of IBD can still become pregnant and safely carry an unborn child full-term. However, many of these same medical professionals suggest that the best time for those afflicted with IBD to conceive is during a period of remission. While conception and gestation during a flare is possible, these flares can worsen symptoms that might place both mother and fetus at unnecessary risk for complications including difficult deliveries, miscarriages, premature births, and infants born with dangerously low birth weights.

Steps Women With IBD Can Take

Doctors say that latent IBD should neither deter a woman from attempting to conceive nor prevent the birth of a healthy newborn. These healthcare professionals recommend that these patients strictly adhere to several precautions geared towards preventing flareups and ensuring the health and safety of their unborn children. Such safeguards include: