When you are pregnant, your body naturally goes through many changes. One of those involves your dreams. Pregnancy dreams are common and meaningful.

Being pregnant means you have a surge of hormones you were never truly aware of before. As a result of all these seemingly crazy new hormones rushing through your body while your baby grows, you can end up having some very strange dreams, many of which you remember because you tend to wake up several times during the night. According to the director of the Dream and Nightmare Laboratory in Canada, Tore Nielsen, pregnancy dreams are so vivid and bizarre due to the stress hormone cortisol. Some dreams are also more common during this time in a woman’s life. It’s interesting to try and decipher those dreams.

Pregnancy Dreams About the Baby’s Gender

One of the most common types of dreams during pregnancy revolves around the gender of your unborn child. This signifies that you might prefer one gender over the other, even if you are not consciously aware of it. However, if you experience this kind of dream, you may be thinking about the gender of your baby a lot.

Early on in a pregnancy, many women may dream about conception. However, rather than the actual way conception takes place, the expectant mom may dream of a metaphoric way that their baby was conceived, such as in the form of an animal. A common conception dream is a fish planting itself into a body of water. In other dreams, a baby might start out as a young, small animal and then grow into larger ones. This is normal as your baby grows with each month and trimester over the nine-month pregnancy.

Not surprisingly, women’s pregnancy dreams shift to giving birth once they reach their third trimester. These dreams may involve a realistic birth or one that is completely the opposite, such as going into labor in public while the baby’s body parts begin to show from various areas of your body. If you have this type of dream during your pregnancy, it simply means that you are apprehensive about giving birth or about the possibility of things not going the way you envisioned. At the same time, such dreams can also mean you’re excited about the impending birth of your child. 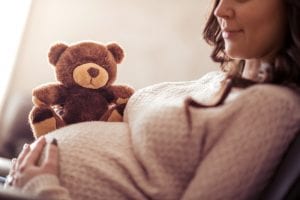 Dreams of Giving Birth to Animals or Objects

Another common dream during pregnancy is about giving birth to different types of animals or even inanimate objects. These are not at all strange and date back to 1899 and Sigmund Freud’s The Interpretation of Dreams, in which a woman discussed having a dream that she gave birth to a seal. These dreams are metaphors that are misinterpreted as the mother is worried about some abnormality in her baby. However, in reality, it means she’s preparing for the baby and all the responsibilities of nurturing and caring for the child.

Dreams About Being Trapped

Dreams About Forgetting the Baby

Pregnancy can bring about anxiety in any woman, which can lead to dreams about forgetting her baby such as leaving the child unattended. This is a normal fear that all parents can experience. Often, this dream signifies that, psychologically, the mom isn’t quite ready for a baby.

Nightmares About Physical Harm to Yourself or the Baby

Nightmares are also very common during pregnancy. One that plagues many expectant moms is a situation where her or her baby’s life is in danger. Usually, when a pregnant woman dreams such a thing, she awakens in a panic. However, this dream usually means she’s worried about being a good mother and about accidentally harming her baby.

If you have experienced bizarre pregnancy dreams while awaiting the birth of your baby, it’s important to know you’re not alone—these dreams are normal. When you know what they mean, you can breathe more easily.