A medical condition known as nipple vasospasm could impact a woman’s ability to breastfeed her child. There are precautionary measures and treatment options that individuals can take to either prevent the ailment or curtail its manifestations should the disorder arise.

This health problem occurs when a woman’s nipples become tender, painful or damaged in the weeks and months following childbirth.

In many instances, the condition is precipitated by a narrowing of blood vessels inside the breast and surrounding the nipple. The vascular constriction can be caused by the repetitive act of breastfeeding an infant. However, the disorder could be elicited by several other conditions including Raynaud’s syndrome (in which blood supply to the breast and nipple is inhibited) and mammary constriction syndrome (in which the breasts and chest are significantly stretched).
Typically, the underlying factor causing vasospasm is the way in which the baby latches onto the nipple when feeding. Moreover, the condition might also be precipitated or exacerbated by numerous underlying factors like exposure to second-hand smoke, cigarette smoking, severe emotional disturbances, migraine syndrome and various drugs used to treat ailments like hormonal imbalances and autoimmune disorders.

Vasospasm could bring on numerous symptoms including extreme pain, itching or burning in the nipples and surrounding tissues (especially following breastfeeding), deformed or misshaped nipples, blanching (a whitening) or other nipple discolorations, as well as pain that permeates to other regions of the breasts or chest. Additionally, all said manifestations may be worsened by low air temperatures.

If vasospasm progresses significantly or if it is left untreated, the damaged or weakened breast or nipple tissue could become susceptible to skin infections. 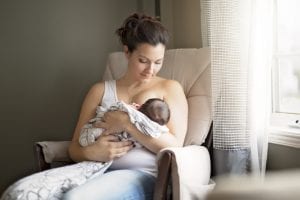 Another important complication is the condition’s potential to eventually inhibit a mother’s ability to breastfeed due to pain or other associated symptoms. These circumstances would necessitate the identification of alternate means of providing nourishment for the newborn; otherwise, there is risk of nutritional deficiencies that may result in health or developmental issues.

Adopting a proactive stance in practicing cautionary safeguards could prevent the ailment’s onset. These measures can include the following:

Should a woman be diagnosed with the condition, relief might be found by identifying and correcting the exact underlying cause, receiving nipple massages that not only soothe the area but stimulate blood flow to it, or applying creams and ointments to the affected regions.