A nutrient known as lycopene could play an integral role in preventing women from contracting a potentially serious medical condition called preeclampsia. In addition, the substance has several other benefits.

Once scientifically classified as toxemia, this condition is a type of high blood pressure only experienced by expecting women. Typically, the elevated blood pressure begins late in a pregnant woman’s term. However, in certain instances, the malady might begin earlier in the gestation period.

Doctors and medical researchers cannot pinpoint the exact cause. However, they believe that specific factors may increase individual risk such as experiencing a first-time pregnancy, becoming pregnant at age 40 and older, teenage pregnancies, having been diagnosed with high blood pressure prior to conception, obesity, a family history of the illness and being afflicted with various autoimmune disorders.

If left untreated, this illness could have profound, potentially life-threatening complications for both mother and unborn child. Though relatively rare, the condition could precipitate the development of strokes, cardiovascular problems, permanent eye damage, seizure disorders, and internal bleeding in the mother. In the unborn baby, it could contribute to issues like miscarriages, stillbirths, premature births and a host of ailments and birth defects.

Unfortunately, the only cure is childbirth. However, during the pregnancy, women and their physicians must pay very close attention to the condition and initiate various methods of control depending on several factors, including the woman’s age, general health, the underlying condition and the high blood pressure’s severity.

The Role of Lycopene 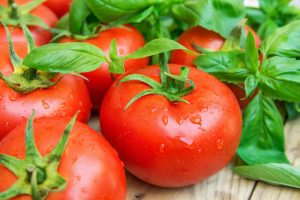 Many medical professionals agree that the only “cure” is prevention. Scientific research has concluded that lycopene might play a role in preventing the development of pregnancy-induced high blood pressure.

This substance is a plant-based nutrient known for providing fruits and vegetables their red coloring, most notably tomatoes. The substance can be found abundantly in a variety of produce items such as all varieties of tomatoes, watermelon, pink grapefruit, guava, red peppers, and papaya. Additionally, the nutrient can be found in various vitamin supplements.

A 2011 study conducted by the Turkish-German Gynecological Association examined the impact the nutrient had on more than 50 expecting women whose current terms ranged from 14 to 28 weeks and who possessed increased risk factors for developing pregnancy-induced high blood pressure. The scientists administered daily concentrations of lycopene to 30 of the test subjects, and the remaining 24 received no such preparation. This experiment continued until each subject gave birth.

Of the 30 who were administered lycopene, only 20 completed the experiment. All 24 members of the control group finished the assignment. Scientists concluded that the nutrient did not exert a profound impact on reducing high blood pressure in high-risk subjects, but might prove effective in preventing specific birth defects.

Lycopene’s Other Benefits to Expecting Women

Scientists, however, do not suggest that these findings mean lycopene has no value to pregnant subjects. The nutrient is said to possess numerous properties that could very much contribute to a safe and healthy pregnancy that is carried to full-term.

Most notably, lycopene is said to possess powerful antioxidants, which are infection-fighting nutrients. Additionally, the chemical is said to promote cardiovascular health and stimulate blood flow, which can be critical to the health of an expecting woman and her unborn child. Moreover, of particular importance to expecting women is lycopene’s ability to combat muscle and nerve pain, as well as its perceived bone-strengthening capabilities.

Pregnancy Basics
Previous Post: « Tips to Weaning Baby from Breastfeeding
Next Post: Balancing a Return to Work While Breastfeeding »