Understanding tongue-ties may alleviate multiple complications for both child and parent. This is because a tongue-tie can inhibit the tongue’s proper movement.

Ankyloglossia, also known as “anchored tongue,” is a commonly overlooked physical condition that is typically noticed at birth. It is responsible for numerous challenges affecting both mother and baby. Diagnosis by qualified professionals has led to more informed assessments and treatments that can help alleviate the symptoms and effects it can bring.

The Nature of Tongue-Ties

The lingual frenulum is a membranous cord present underneath the tongue stretching to the floor of the mouth. As a fetus develops in the womb, the frenulum tissue normally reduces to the point of insignificance before birth. Tongue-tie is a condition that gets its nickname from how the frenulum appears to tie the tongue down, thus impeding movement. The free movement of the tongue is essential to oral and digestive health, not to mention oral communication.

A normal, elastic frenulum will not interfere with such movements of the tongue necessary for sucking and preparation to swallow as well as eating and clearing food from the teeth. Tongue-tie can be severe enough to cause a speech impediment. When the frenulum is shorter, broader, thicker, or tighter than normal, it can adversely affect oromuscular function. Such impediments can show up in a variety of ways. 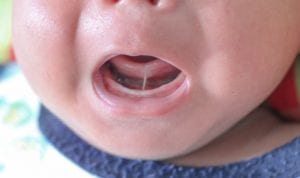 Detecting tongue-ties in neonates is easy simply because it is obvious by the appearance:

Even if these signs are not pronounced, tongue function can still be severely impaired. The most significant impact is on breastfeeding. Babies may fail to thrive when tongue-ties are responsible for unsuccessful sucking efforts. Instead of breastfeeding, the baby tends to fall asleep exhausted by the fruitless efforts only to wake up soon after, unsatisfied by the prolonged feeding time.

The Effects of Tongue-Ties on Mothers

For the mother, she can experience pain from nipple damage, bleeding, nipple distortion, mastitis, or blocked ducts. Milk production may suffer, which further leads to the possibility of baby’s failure to thrive. Mom may experience severe pain in this process of her baby latching on or losing the latch. Both mother and baby may lose sleep, and mom may be subject to a state of depression from the sense of failure.

Where breastfeeding is normally an opportunity to bond between mother and child, this precious time suffers. Repeated failure of sufficient breastfeeding can not only lead to acute malnutrition in the child, but also could delay this essential bonding process.

In addition to detecting the appearance and movements of the tongue, misarticulation can be heard as the child is learning to speak. Most notably, speech impediments affect the clarity of pronouncing letter sounds such as “t,” “d,” “z,” “s,” “th,” “r” and “l.”

In addition to weight loss caused by malnutrition, the child may also vomit or gag when the tongue is not free to move and help with swallowing. This could then lead to difficulty eating from poor coordination. Prolonged dribbling, dental issues, and impaired speech may also plague the child.

Challenges continue as the child grows. Imagine the frustration of not being able to adequately lick an ice-cream cone, lick the lips, play a wind instrument or even be able to kiss. 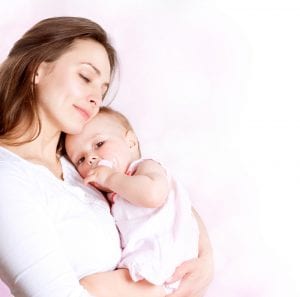 Tongue-ties are hereditary, showing up more in males than in females. While there are statistics reflecting the occurrence in newborns somewhere between 4 percent to 11 percent, there are yet to be comprehensive studies that accurately account for the frequency of this condition. The severity of the condition may vary from mild to severe.

Sometimes tongue-ties occur simultaneously with other congenital mouth issues such as a cleft palate or lip. The condition has also been recognized in conjunction with severe hearing loss or cerebral palsy.

Tongue-ties can be corrected with division performed by doctors, nurses or midwives who specialize in this procedure. It involves snipping the frenulum either with surgical scissors or a laser. For babies who are but a few months old, this procedure is performed without anesthesia because there are very few nerve endings in this tissue. For older babies who have teeth, a general anesthesia is used. It is a procedure that only takes a few seconds with the baby ready to feed immediately following.

There is very little blood loss associated with this procedure. There may be a patch of white that appears underneath the tongue that does not affect the child and will heal within 24 to 48 hours. Research has shown that babies who receive the treatment are able to breastfeed much easier following the procedure. It is a good idea to proceed with breastfeeding to get the tongue and lips moving and to promote healing and reduce scarring.

Having this procedure done early in the baby’s life not only eases their ability to breastfeed, but it also provides more successful bonding time while doing so. Later in life, the freedom to use the tongue to sweep food from the teeth in the normal process of eating both aids in proper digestion and helps prevent dental issues. Untreated tongue-ties do not always cause problems as the child ages, and some tightness may naturally resolve itself as the mouth structure develops. Speak to your general practitioner to quell any concerns you may have.