There’s no doubt, what happens to your body during pregnancy, happens to your baby. Due to the fact that there are many controversial opinions about vaccinations during pregnancy posted on the internet, many women remain uninformed of their importance while pregnant. This lack of proper information or misunderstanding of certain immunizations may, as a result, leave them vulnerable to contracting illnesses that could affect their health and their unborn children.

Why Vaccines are Important

It is quite possible to contract diseases that are easily transferred to your unborn child in utero. Outbreaks like modern measles scares and coronavirus outbreaks make it increasingly important for pregnant moms to be to make sure they get the appropriate vaccines during pregnancy.

All vaccine recommendations and made by the Center for Disease Control (CDC) are determined based on the vaccine composition, for example live vaccines should not be given to pregnancy; safety concerns for mother and baby; and risk factors for infection. However, they should be administered under a doctor’s prescription to ensure that they are taken at the right time and for the right reasons. Also, it is important to keep in mind that some vaccines, such as the influenza vaccine, contain eggs that may pose allergic risks to some women. 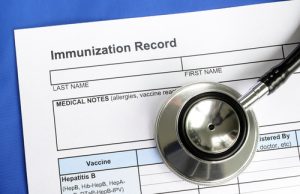 Prior to receiving any vaccinations during pregnancy, it is important to know which vaccinations have already been received. This can be determined using former school immunization records, as well as shot records from any clinics, pharmacies, or healthcare providers where immunizations may have been received.

For expecting mothers, who are planning on international travel, it is also important to check with a healthcare provider to determine which, if any, vaccinations may be needed for entrance into a specific destination country, and which are safe to receive during pregnancy.

Not recommended during pregnancy. If not yet received; recommended at least one month prior to trying to become pregnant.

When it comes to common vaccination requirements, in the United States, most individuals are vaccinated against measles, mumps, and rubella as children, known as the MMR vaccination. However, if these have not been received, it is recommended to do so prior to pregnancy, as these diseases, rubella in particular, can cause serious complications for the baby’s health.

For women who have not received the MMR vaccination, it is recommended to receive this at least one month prior to trying to become pregnant.

Not recommended during pregnancy. If not yet received; recommended at least one month prior to trying to become pregnant.

Additional common vaccination includes the chickenpox/Varicella vaccine, which, if contracted during pregnancy, can cause birth defects or pregnancy complications.

For women who have not received the chickenpox/Varicella vaccine, it is recommended to receive this vaccine at least one month prior to trying to become pregnant.

Not recommended during pregnancy, but not a cause for concern if received before confirmed pregnancy.

The HPV vaccine, though not specifically recommended during pregnancy poses no additional threats should it be administered while pregnant. Because this vaccine is typically given in two or three doses, additional doses may be postponed until after pregnancy if they were started during or prior to confirmed pregnancy.

Typically, this vaccine is administered to individuals younger than 26, however receiving it before the age of 45 may be recommended if risk factors are present.

May be recommended during pregnancy if risk factors are present.

There are two types of Pnemococcal vaccines, one or both may be needed and this may only be suggested during pregnancy if certain risk factors are present. If not recommended during pregnancy, it is advised that this vaccine be administered prior to pregnancy or postpartum if mother needs it.

Not recommended during pregnancy. Recommended after pregnancy if needed.

The shingles vaccine is not advised to be given during pregnancy due to a lack of research to determine its impact on pregnancy and fetal health, however inadvertent vaccination has not shown any specific risks.

Typical vaccination for this is received at the age of 50 or older in a two-dose series of vaccinations.

Not all vaccines are required before pregnancy however, there are some specific ones that the CDC acknowledges women should be guided to obtain during pregnancy to help prevent transferring certain diseases to a growing fetus and keep expecting mothers safe.

The following vaccines are those deemed as safe for expectant women who may be at risk of contracting infections.

During pregnancy, a woman’s body gives most of its energy and attention to creating the baby, thus suppressing the immune system. Influenza shots are critical for protecting both the mother and her unborn child from the flu virus after exposure. One of the most commonly known yearly vaccines deemed safe at all stages of pregnancy, the flu vaccine should be administered in shot form, which is made from an inactivated virus, in preparation for flu season. The rarer flu nasal spray vaccine, LAIV, is not recommended for women who are pregnant, or who are trying to conceive as it contains a live strain of the virus. Although the flu may seem like an insignificant virus, it is important to know that contracting it during pregnancy may cause severe damage to a pregnant woman’s body.

While healthy adults can carry the flu virus without showing any symptoms, expectant women tend to show a number of signs as the immune system tries to fight off the infection. Symptoms may include the following:

Additional precautions can include ensuring that all persons who are in close contact should also be vaccinated and women should avoid contact with those sick with the flu to reduce the risk of flu exposure.

Offering protection against tetanus, diphtheria, and whooping cough (pertussis), the Tdap vaccine, can be administered safely at multiple stages depending on previous vaccination.

The U.S. Centers for Disease Control and Prevention reports that on average, whooping cough accounts for about 1,000 infant hospitalizations and five to 15 infant deaths each year in the United Stated. For this reason, the whooping cough/Pertussis vaccine is the number one vaccine suggested for pregnant women.

This vaccine offers protection to both the mother and unborn child, with optimal administration of the vaccine occurring around 27 weeks gestation to maximize the maternal antibody response and passive antibody transfer to the infant. Because the newborns and infants are at the highest risk of infection, Tdap vaccination is administered with the purpose of optimal protection to the baby during gestation and after birth.

Hepatitis B and A:

Read more about Hepatitis B and A Vaccines

Hepatitis B is a vaccine-preventable severe liver infection that is spread through contact with infected blood and bodily fluids. The disease can easily be passed from mother to unborn child during delivery. Getting the hepatitis B vaccine during pregnancy can help protect the unborn baby from getting infected with the disease.

If women have received prior hepatitis B vaccination, it can be beneficial to receive the vaccine again to prevent future infection of both mother and child. Additionally, those at a higher risk for contraction, such as those working as healthcare providers, should also consider getting this vaccination. For full immunity against hepatitis B, doctors may recommend a series of three doses. The first dose should be administered before pregnancy, the second at one month and the third at six months after the initial dose.

Hepatitis A is a low-grade liver disease. This disease is not as serious as hep B, however it is something to consider taking precautions for. It is not likely the disease will be passed on to an unborn fetus, however, the possibility is there. Hepatitis A can cause infection in the newborn and premature labor. This is a vaccination that should be especially considered for women with chronic liver disease or residing with someone with the disease, or if they are traveling during their pregnancy, as hepatitis A is a disease that can be contracted through contaminated water and food.

Research results on COVID-19 vaccines during pregnancy show that there is no negative risk of receiving the vaccine during pregnancy. Because of the highly contagious nature of COVID-19, it is important to provide the body with vaccination for preventative measures, even if full immunity is not possible. Like other immuno-compromised conditions, pregnancy presents an increased risk of severe complications and long-term symptoms due to infection with COVID-19. COVID-19 infection during pregnancy poses an increased risk of hospitalization, preterm birth, stillbirth and maternal fatality. Additionally, studies have found that pregnant women diagnosed with coronavirus had over a 60 percent chance of developing preeclampsia, even if the mother was asymptomatic (experienced no symptoms while infected with virus).

Can Immunizations Harm a Growing Fetus?

Vaccines Do Not Cause Autism 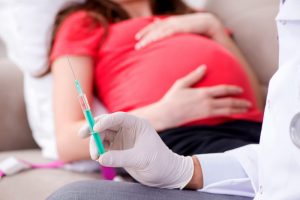 The loudest debate of vaccinations with pregnancy stems from an incomplete study conducted years ago, in which a gastroenterologist published a claim that the MMR vaccine caused autism in children. As a result of this claim, numerous private and government health agencies have attempted to recreate this study and achieved no results. The consensus in the medical community stating that there is no link between the MMR vaccination and the onset of autism.

One vaccine ingredient that has been specifically criticized is thimerosal, a mercury-based preservative used to prevent germs from contaminating vials of vaccines. Since 2003, there have been nine CDC-funded or conducted studies exploring any link between thimerosal-containing vaccines and autism. These studies also found no link between the MMR vaccine and autism onset.

Additionally, in 2004 a scientific review by the Institute of Medicine (IOM) concluded that “the evidence favors rejection of a causal relationship between thimerosal–containing vaccines and autism.”

Scientific research determines that it is not only safe to immunize children with the MMR vaccine, but it is also advised to continue vaccination protocols as recommended by medical professionals.

All in all, there are a number of vaccines that are recommended before, during, and after pregnancy for mom and baby. These vaccines are determined by various factors such as lifestyle, medical history, age and risk factors, and it is important to include necessary vaccination requirements into a vaccination plan when planning additional tests and procedures required at various stages of pregnancy and postpartum.

Vaccines are like any other medicine, which means they can have some side effects. However, most people who get vaccinated have no side effects or only mild short-term side effects.

Like all aspects of pregnancy and health, no two pregnancies are the same, and women’s specific requirements and effects may play a role in determining which vaccinations are needed and not. Genetic factors, gene mutations and allergic reactions can all play a role in determining the risk factor and safety of certain vaccinations. Thus, it is important for expectant women to talk to their doctors to discuss any vaccination concerns they may have, and determine which vaccines should be taken during pregnancy and which ones should wait until postpartum or later.

Pregnancy Basics
Previous Post: « Having a Healthy Pregnancy with Diabetes
Next Post: Insomnia During Pregnancy: How to Deal with It? »