Along with the notorious morning sickness and swollen ankles, sore and bleeding gums during pregnancy is a common concern among pregnant women. While the exact cause of these gum concerns may be as simple as dry mouth as a result from dehydration, pregnancy hormones can also lead to an increased risk of periodontal disease. Because of this, when sore gums or bleeding becomes present, don’t wait until you are in the hospital or seeking emergency dental help to get it checked out.

As you continue on your pregnancy journey and begin to experience a number of new changes and symptoms, here are a few things you should know about sore and bleeding gums during pregnancy, so you can maintain optimal dental and oral health.

Causes of Dry Mouth During Pregnancy

Dry mouth, also known as xerostomia, can lead to bleeding gums during pregnancy, and is one of the most common causes for this condition. In addition to bleeding gums, dry mouth can also cause the gums to be painful and lead to a decreased ability to keep the teeth moist.

Simple dehydration isn’t the only cause of this condition however, a number of factors can play a part.

During pregnancy, the increased estrogen levels in your body cause the glands of your mouth to produce less saliva. This lack of saliva makes it difficult to prevent oral diseases and can lead to dry mouth and additional gum problems.

Pregnancy also affects the salivary glands themselves, reducing saliva production by up to 50 percent. Healthy saliva production is one of the most important factors in preventing oral diseases and maintaining good oral hygiene.

Dehydration and frequent coughing or snoring during sleep can also reduce the amount of saliva in the mouth, contributing to dry mouth during pregnancy.

During pregnancy, the need to take in an increased number of calories can take its toll on the mouth, especially when food quality and makeup isn’t considered. It may be no surprise, but salty foods can exacerbate dry mouth symptoms, not to mention it can also negatively impact swelling, inflammation, overall health, and reduce the amount of saliva produced.

Additional foods that can play a role in gum health are vinegar which can be harmful to your mouth if it is dry, as a lack of saliva can lead to the acids breaking down your enamel and leave your tongue defenseless against the bacteria inside your mouth which can lead to an overgrowth of fungus called Candida albicans, a condition also known as thrush.

Some women experience morning sickness during the first trimester caused by changes in hormones during pregnancy. Saliva’s role in this symptom is needed to neutralize the harmful substances produced during vomiting, so a dry mouth tends to occur with morning sickness as the saliva is used up.

Regardless of the cause, during pregnancy, it is important to maintain good oral hygiene and maintain regular dental care visits to ensure the health of your gums as well as overall oral health. Brushing your teeth twice a day and using fluoride toothpaste, if so inclined, is important.

If your gums are bleeding, it is important to visit your dentist for an examination to confirm there are no underlying issues that could be more cause for concern, as in some cases, bleeding gums during pregnancy may be a sign of gum disease. When additional concerns are a factor, other accompanying symptoms that may include the following.

During pregnancy, hormonal changes can cause the gums to swell and become sore. It is extremely important to see your dentist if your gums are swollen and sore.

During pregnancy, increased estrogen levels may cause a tumor-like reaction in the gums, which leads to enlarged gums. It is also common for pregnant women to experience bleeding from gum tumors.

If bleeding occurs and your dentist detects gum disease, they may recommend an antibiotic injection to treat gum disease during pregnancy. If your gums bleed more than once a week, it is recommended that you visit your dentist for treatment.

Some other treatment options for bleeding gums during pregnancy include: 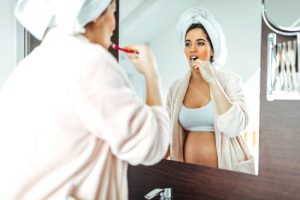 Brushing your teeth twice a day and visiting your dentist regularly are important for maintaining good oral health during pregnancy. After the baby’s birth, it is recommended that you visit your dentist for routine dental care to avoid any incidents of tooth decay or gum disease.

Flossing is an important way to remove plaque and prevent gum disease during pregnancy. It is recommended that you floss at least once a day. Some dentists also recommend using an interdental cleaner during pregnancy to clean the area between your teeth.

One of the main complications caused by gum disease is periodontal disease, which causes bad breath, canker sores and infection in the gums. Periodontitis may eventually cause your teeth to become loose and can even result in tooth loss.

Gum disease can also cause chronic pain, dental abscesses, gum recession, jawbone damage, and if left untreated, cardiovascular concerns.  A link has also been found between gum disease and other serious health concerns such as diabetes and stroke.

Pregnancy Basics
Previous Post: « The Benefits of Iron During Breastfeeding
Next Post: Is Monkeypox Dangerous for Children and Pregnant Women? »